CHENNAI: The viral explosion that began at the Koyambedu market is sending ripples across districts. District administrations of Ariyalur, Perambalur, Cuddalore, and Villupuram have intensified contact tracing, after it emerged that several positive cases in their respective areas had visited the market in Chennai. Meanwhile, officials in the city have already stopped all retail operations at Koyambedu, besides shifting out some sections to other locations.

TAISHA, and Nerkundram -- have been sealed. Of the 20 cases that tested positive in Ariyalur and Perambalur on Saturday, 18 have links with Koyambedu. As the market was shut, many workers returned home to these districts by trucks. In Perambalur, one such worker who returned went missing. The police then tested the man’s family and found his 6-year-old son positive, after which the father returned. He too had the virus.

Seven workers from Koyambedu have tested positive in Cuddalore. A senior official in Cuddalore said 550 persons working in the market had come back to their homes in the district. “The district could have more people with links to the market. On April 29, two positive persons who jumped quarantine in Chennai were traced down in the district. They have been admitted to the local medical college in Chidambaram. So totally, nine of the cases here are linked to Koyambedu,” said local officials.

In Tirupur, two men who visited Koyambedu to procure watermelons, tested positive. The duo, lorry drivers aged 20 and 50, went to the market in the last week of April. After the spurt in cases was reported, they voluntarily went to the district hospital for check-up. Sources say they were taken to isolation straight, and had no contacts. However, efforts are on to trace contacts, if any.  Villupuram SP has issued a statement asking all those with a travel history to Koyambedu quarantine themselves for 14 days. Here, two persons among 100-odd people with link to the market tested positive on Saturday. 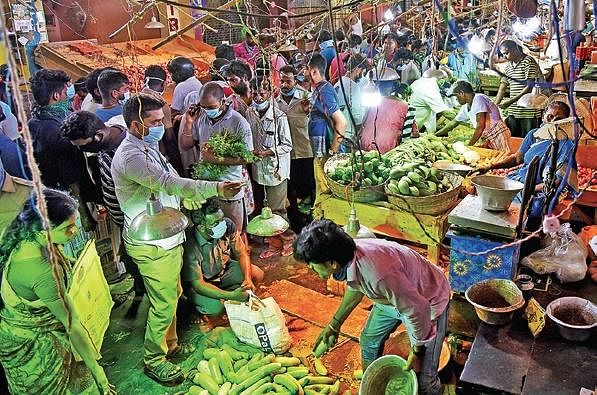 Twenty of them were tested of which two have tested positive.

Two persons in the district, with a link to Koyambedu, tested positive earlier -- one is a curry leaf seller from Kuchipalayam while the other is a 49-year-old man from Avudiyarpattu near Vikarawandi. Since the 49-year-old patient had visited a primary health centre in Rathapuram before being admitted to the Covid ward.

Hospitals running out of bed?
With the surge in cases, hospitals in the city seem to be running out of beds. “COVID care centres have been set up at all hospitals and a total of 600 additional beds are available in them. We are looking at the possibility of  increasing the number,’’ a source in Health Department. Meanwhile, Chennai Corporation has upped its quarantine facilities by identifying about 50 schools which would be turned as COVID-19 relief centres. Corporation Commissioner G Prakash said an increase of close to 20,000 beds will be made in next 15 days.

“We will take over private and government school buildings and marriage halls. The process has already begun,’’ he said. The Corporation has set up beds in Loyola College while in North Chennai, it has identified the Kanyaka Parameswari Arts College.

Sealed!
Many areas in and around Koyambedu including Aiyappa Nagar, TAISHA, and Nerkundram have been sealed. All retail operations have been stopped at Koyambedu market

600
additional beds are available ar the CIVD care centres set up at all hospitals, according to a source in Health department