In addition, Thiruvanmiyur market has also been closed down after a vendor tested positive. So far, over 50 people have tested positive owing to their links with the Koyambedu market.

CHENNAI: The spillover of cases from Koyambedu market, the COVID-19 hotspot, is getting bigger. On Sunday, officials said 24 people from the city’s Ashok Nagar 11th street area tested positive, adding to the swell.

In addition, Thiruvanmiyur market has also been closed down after a vendor tested positive. So far, over 50 people have tested positive owing to their links with the Koyambedu market.

Out the 24 cases in Ashok Nagar, two are retail vendors who used to visit the market and the rest are their contacts, including customers. Search is on for others, said the officials.

“These two are first-time vendors. They were not selling vegetables before this, but took up the trade during the lockdown,” said a corporation official.

All of them are stable, the official added.

The footprints of the virus made its mark in the Thiruvanmiyur market in South Chennai which had to be shut until further orders after a 68-year-old vegetable vendor tested positive on Saturday.

He used to go to the Koyambedu market everyday to buy vegetables and is suspected to have contracted the infection from there. 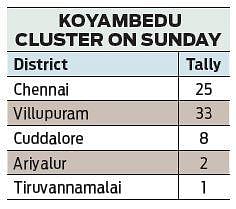 “We immediately closed the market and samples of other vendors have been taken,” said a corporation official.

So far, 55 samples have been taken, which includes 13 of his close contacts and family members.

The officials said the market will be opened in two days and vendors will be asked to pitch their tents across five areas nearby, including East Mada street and West Mada street.

Apart from those in the city, there have been a spurt in cases in many districts across the state due to the Koyembedu connection.

They have either gone back to their native from Koyembedu market or are contacts of those who went there.

Villupuram recorded a whopping 33 cases on Sunday, all of whom have links with Koyambedu vendors. Health department sources said out the 33, 26 are men, seven female and two children, aged three and eight. In Cuddalore district, eight more workers, who had returned home, tested positive on Sunday.

In a case unrelated to Koyembedu, an 11-year-old girl from Panruti who is the secondary contact of a positive patient in JIPMER, Puducherry, too tested positive and was admitted to Rajah Muthiah Medical College Hospital.

In Tiruvannamalai, a 37-year-old man became the first from the district to test positive because of his connection with the Koyambedu cluster. Two more persons who tested positive in Ariyalur on Sunday also have a Koyambedu connection, taking the district’s count from Chennai marker to 20

Now we are on Telegram too. Follow us for updates
TAGS
Koyambedu Coronavirus COVID-19 Chennai coronavirus