What made Tiru Vi Ka Nagar a Covid hotspot?

There has been an unprecedented spike in cases at Tiru Vi Ka Nagar over the last one week.

CHENNAI: There has been an unprecedented spike in cases at Tiru Vi Ka Nagar over the last one week. As per Monday’s numbers, the zone has 357 cases, of which 314 are active. It has even overtaken Royapuram to become the zone with most number of cases. The main reason for the spike, officials say, is a prayer meeting organised by a family in Pulianthope.

“Two infected persons took part in the prayer meeting in the last week of April. Now, we have as many as 170 cases in that area,” a senior official said. Till April 22, there were just 42 cases in the zone. Now, 13 days later, the zone accounts for 20 per cent of total cases in the city. “We managed to contain the Delhi cluster quickly. Here, most residents live in tightly packed areas,” a corporation official said.

“Hygiene was very low and nobody was wearing a mask.” The Tiru Vi Ka Nagar zone has a population of 60,000. Of the total cases here, 314 are in hospitals, 40 recovered, and 3 have died. The number of containment zones here, however, is less than Royapuram -- 70 and 80. Officials say almost 50 per cent contacts of the prayer meeting patients have tested positive.“We have contained the cluster now, and hope the cases will reduce in the coming days.” 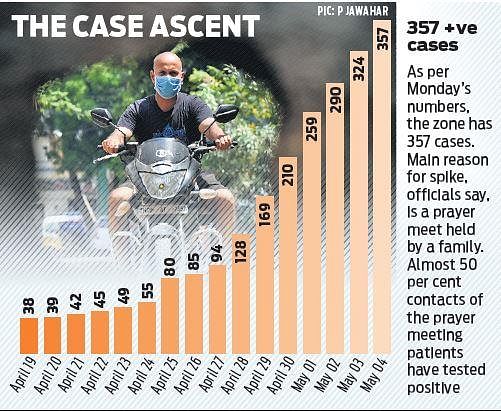