From jobs to tranquillity, apps can take away anything from borrower

CHENNAI: A simple search in the Google Play Store shows hundreds of applications, such as Udhaar Loan, Snapit Loan, Rupee Bazaar, Rupee Factory, OK Cash, Paisa Loan, Cash Advance, Top Cash, and iEasy Loan, among others, that offer instant money. Though the names of the applications differ, nearly all of them use the same modus operandi. 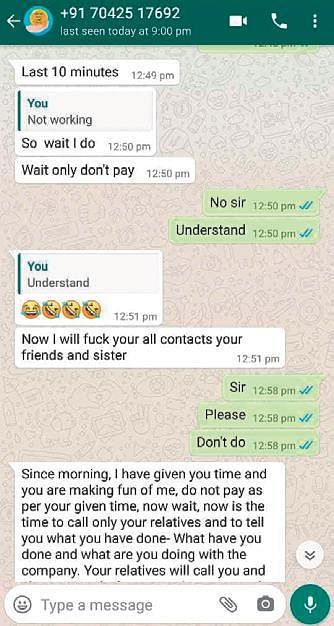 While installing the app, one is required to submit details of Aadhaar card, PAN card and bank information along with a permission to allow access to contacts. Customers can avail a loan in the Rs 5,000 to Rs 50,000 range, instantly. When one requests a loan of Rs 5,000, the app holds back Rs 1,500 as the interest and processing fee, and gives only Rs 3,500. But, when the loanee has to return it in a short span of time, they are required to pay back the entire Rs 5,000, alleged a few.

Many others like Aravind
A 26-year-old man, who was working with a private company, lost his job and paid over `1 lakh, all because he took an instant loan of Rs 5,000. Speaking to Express, Baskar (name changed) said, “Since there was no tough procedures involved, I was happy that I got an instant loan. I was asked to pay back the money within seven days.

However, just about 10 minutes before the given deadline, I got a call from a man who claimed to be one of the staff of the app, who abused me for not returning the money immediately.” Baskar was also threatened with messages.

“Only then I realised that I had given permission for the app to access my contacts and they had gained control over it. They also sent messages to some of my contacts saying that I had cheated them,” he said. With not much money on him to pay back the amount, Baskar resorted to another such mobile app, through which he received Rs 10,000.

He used it pay off the first loan, but was caught in an indefinite loop. In two months, he had a debt of Rs 2.5 lakh. Unfortunately for Baskar, one such message by a “recovery agent” reached his company’s manager, who was also abused by them. “I lost my job soon. Now I have no job and am sitting on a pile of debt,” he lamented.