With over 156 road accident cases per day, Tamil Nadu ranks first for the third year according to data from the NCRB. Most accidents took between 6 and 9 pm.

CHENNAI: With over 156 road accident cases per day, Tamil Nadu ranks first for the third year according to data from the NCRB. Most accidents took between 6 and 9 pm. The police claimed the State stood first because of the up-to-date recording of accidents. 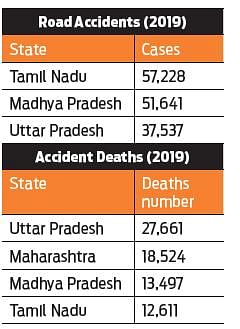 Though the numbers are high, deaths due to accidents have come down and police attribute it to the traffic awareness campaigns and strict violation control done by the police.

With regards to deaths on National Highways, Tamil Nadu stood third with 3,921 cases, behind Uttar Pradesh and Maharashtra. TN, meanwhile, recorded the highest number of cases on State Highways with 19,279.

Out of the 86,241 deaths due to overspeeding in 2019, Tamil Nadu has 8,832 deaths after Karnataka with 9,314 deaths. Under the mega cities, Chennai holds the second place in road accident deaths with 1,252 after Delhi.

Now we are on Telegram too. Follow us for updates
TAGS
NCRB accidents road accident