Singing a new tune of justice

CHENNAI: You don’t need the endorsement of Ashoka Universi ty or the minute-long introductory text that leads up to the measured, mellow opening of TM Krishna’s first phase of The Edict Project to know that there’s much to love about this composition. It’s TM Krishna, after all. It’s not what you are used to hearing from the man; the words almost seem just a little out of place, given its newness. You find yourself catching up with the subtitles and making sense of the foreign tongue.

But, seconds into the video, you drop all assumptions as you watch the man surrender to the war-wrought philosophies of the 2nd century (BCE) emperor. As he takes you through Ashoka’s ruminations on dharma, offering a delicate mix of despair and hope, you find yourself coming out of the song ready to weep. It took the greatly devastating results of the war over Kalinga for King Ashoka to pause and find room for change.

This transformation resulted in the monarch adopting dharma as the centre-point of his belief system and royal policy, and disseminating these ideas to his subjects through inscriptions on rock faces and pillars — the Edicts of Ashoka. While we’re far (hopefully) from wars of such magnitude, the deeply unempathetic times we find ourselves in was enough for the artiste to return to the beloved king’s forgotten principles. “As an artiste, the motivation to create from the now and the past need to co-exist and transcend their respective time contexts. 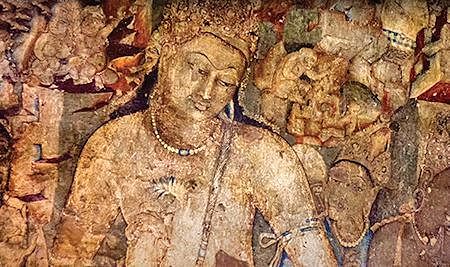 The past and present are always open to interpretations and discussions. When I find precious values of compassion, ethical living and justice in words that have been long lost, as an artiste, I hope to give it new life and imagination in the now. That is all I have done. We live in difficult times and, as a person involved as much in the socio-political as I am in the aesthetic, this project allows me to bring the two together,” he narrates. Scattered across the country and spilling into present-day Pakistan, Nepal and Afghanistan are 34 collections of Ashoka’s work, comprising over a hundred edicts.

While some are in Prakrit, there are others in Greek and Aramaic. So, there’s no mistaking the scale of this project — rendering to music the messages encapsulated in ancient script. “This is probably the first time the edicts are ever being sung; the first time in 2,200 years! Therefore, this was completely new territory for me. I spent a lot of time just with the text — reciting them before I put them in ragas,” shares Krishna. Helping him through the process was the respected Buddhist monk Shravasti Dhammika, and Prakrit and Sanskrit scholar Dr Naresh Keerthi.

“They helped me select the edicts and understand its meaning, and guided me in the pronunciation of Prakrit. It took two months for the sound of the language, the import and music to come together,” he reveals. And what better place to start the project than the edicts on dharma, inscribed onto the rock face in Girnar of Gujarat’s Junagadh. With the general sentiments prevalent today circling around hate, suspicion, pointing fingers, whataboutery and fear, this proved all the more relevant, it seems. When you see the lyrics translate to simple messages of the “gift of justice”, “harmony”, find it even in “another’s reflections on justice”, you need little persuasion to admit this couldn’t have been more perfect. “With this dark cloud of violence enveloping our mind, we have forgotten to seek justice truthfully.

Hence, I felt we should begin with dharma/dhamma,” he adds. Needless to say, there’s plenty more where that came from. The vocalist has already decided on the theme for the next set of edicts he would like to work on. Given the immense potential of the project, Ashoka University has stepped in to collaborate on future endeavours. And there’s much to look forward to.

“Through this partnership, we do hope to create vibrant, academic, socio-political and aesthetic conversations around the edicts. Possibilities for artistic, literary, socio-political and philosophical interpretations are innumerable,” declares Krishna. Ask him about possible partnerships with fellow artistes and he announces that he is open to academic and aesthetic collaborations on this project. “Nothing is ‘etched in stone’!” he adds (pun intended). Ain’t that the hope. Till then, you have this song to obsess over.