CHENNAI: Just as the phrase, “hidden in plain sight” goes, a fake call centre at the heart of Namakkal town, has been busted by the city police on Friday. The police also arrested five people, including the kingpin who ran the centre, conning people across the State to the tune of few crores of rupees over the past few years. The arrested — M Kumaresan (28), his associates P Vivekanandan (41), G Gayathri (20), C Ranjitha (25) and T Subathra (21) — have been brought to Chennai.

According to the police, the gang used online gaming platforms to conceal the money flow. The gang has also employed six juvenile girls, with a monthly salary, to make calls and collect personal details of the victims. The juveniles were arrested and released on station bail. The police said they uncovered the racket while investigating a case filed by one Karupaiah from Perungudi, who was conned of `20,000, with a false promise of offering a loan for Rs 2 lakh. He had lodged a complaint at the Adyar Cyber Crime police on September 9. 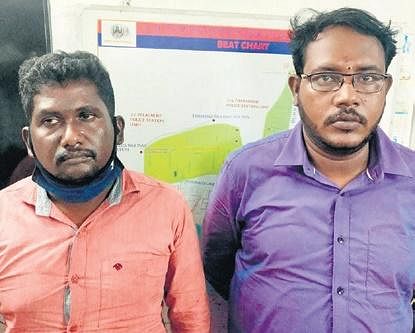 “Karupaiah received a call and his bank account was emptied on April 8. Since the recovery of the amount is difficult, we traced the mobile number and found it to be located in Namakkal. We immediately formed a six-member team and sent them to nab the person,” said Sub Inspector Maharaja, attached to Adyar Cyber Crime. “The team was shocked to find that it was not just one person, and that the fraudsters were running a call centre,” he added.

The centre was an exact replica of a typical call centre - with air conditioners, separate cabins and motivational quotes on walls. The police said the mastermind, Kumaresan, had been running the centre for the past three years, and no one suspected anything fraudulent. Speaking about their modus operandi, Deputy Commissioner of Police (Adyar), V Vikraman said, “They would collect all personal details of the victims and start a bank account in the victim’s name.

In the process, the gang would ask for an OTP and swindle all the money in their accounts and transfer it to the temporarily created account. This would confuse bank officials when the victims approach them for their money, because the accounts are on the victims’ names.” Later, the gang would transfer the money for online games. Transferring the money to the game application would mask account details of the fraudster, and after he is done playing a game, he would retrieve the money to his bank account, Vikraman added. “While the Cyber Crime Wing is efficient to curb fraudster activities, we ask the public to stay vigil and avoid sharing personal details to strangers,” he added.