Under the watchful eyes of two brothers, Jyothi Textiles & Dresses grew into a brand that prioritised customer satisfaction over profits

CHENNAI: They say to be human is to migrate forward across time and geography. No one else would know this better than brothers A Subramanian and A Murugan, who, choking under financial pressures and feeling despondent that fate had deprived them of economic mobility in their native Erode, moved to erstwhile Madras with hope harboured in their hearts in 1958.

Soon, turning the wheels of time — from squinting under the sun as hawkers to pedalling their way around the city to sell saris — their hardscrabble beginnings bore favourable fruits ten years later, when they birthed their brand Jyothi Textiles & Dresses. M Karthikeyan, the son of A Murugan and second-generation co-owner, walks us through the ups and downs of the 52-year-old homegrown brand’s story.
Slow but steady 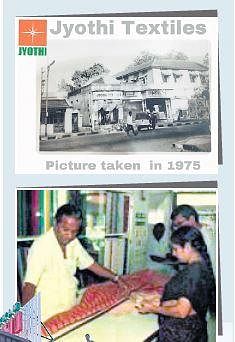 “Appa and periappa ensured they were always present at the store from day-one. Appa parallelly completed his BSc Mathematics from Government Arts College on Mount Road. Eventually, they moved to a bigger building in the same area. In 1989, the readymade section was conceptualised after my cousin S Govindarajan, periappa’s son, entered the business. In 2003, we moved from a rental building to one of our own — the present one — a three-storied edifice sprawling across 18,000 sq ft on Valluvar Kottam High Road in Nungambakkam. To commemorate our 50th year, we opened another 10,000 sq ft outlet in Valasaravakkam in 2017,” shares Karthikeyan. But the initial steps were not as easy. They began their business of trading textiles on a six-month credit, and sometimes on an instalment basis.

“Afternoons used to be the best time for women to come for shopping. As young boys, my cousin and I would toy around with our skills to sell the maximum number of saris. They would purchase clothes in bulk. When appa or periappa saw them at the billing counter, they would engage in friendly chats: ‘Is there any function? Are you going out of town for a vacation? Then why are you buying so much? Why don’t you come and pick a few when the new collection arrives.’ We would be surprised. Who says that? They always went the extra mile in caring for the customers and their families like their own,” he reminisces.

No wonder then that such an ambient shopping experience fetched them a clientele of more than a lakh, including families of multiple generations. It is this promise of respect, trust and hospitality that has clients even as old as 80 years returning to the store and sharing fond memories of shopping with their grandparents during their childhood days. “One of our customers is a senior citizen and a well-known person in the city. On  April 1 every year, the beginning of the financial year, he gives us a cheque of `11,000 and purchases garments. He has not broken the tradition for decades now. We feel proud of the principles that our previous generation has passed on to us,” says Karthikeyan.

Ethics and customer satisfaction have been the brand’s top priority. “This is our only source of bread and butter. We did not open franchises or multiple outlets like other brands because we did not want the quality of service or personalised attention to be compromised. With time, we have also nurtured many salesmen who have gone on to establish their own stores — some even as big as ours. Business runs in our family. We have the moral obligation to be answerable to appa and periappa. They know that we are ready to explore in terms of technical verticals and not exploit the freedom they have given us,” asserts Karthikeyan.

And these very principles helped them survive not just the competition but also demonetisation, the initial GST days. “I joined the business in 2002. The first change I implemented was the transition from handbills to digital invoices — a tradition that was followed from 1958-2008. Appa and periappa are human calculators. The brothers seamlessly adapted to working on computers. When GST was announced, we were the first few retailers in Tamil Nadu, who had our invoices ready for customers without any technical hiccups. We’re now on par with other big players, and our website is also getting ready. I even scrapped the one-day holiday a week so that we don’t lose out on sales to our competitors in T Nagar,” he opens up. With hard work and passion weaved into the warp and weft of their business, they have supported and included weavers from all pockets of Tamil Nadu such as Kanchipuram, Vellore, Salem, Madurai, Coimbatore and Tirupur. Some garments are even purchased from Maharashtra, Bengaluru and Varanasi.

Not all is lost

But with the pandemic having the entire world on its knees, Jyothi Textiles too had to shutter down on March 24. “That was our first two-week vacation in the past two decades. All of us felt refreshed and blissful in the break. Once the relaxations were introduced, we opened the shop from 11 am to 5 pm. Now we are open from 9.40 am to 9.30 pm. Of course, there was a loss and business was dull. We grappled with additional costs because of sanitation protocols and had to replace air conditioners with fans. We ensured our employees were paid their full salary, too,” shares Karthikeyan.

As they weather this crisis along with the rest of the world, Karthikeyan understands that nimble movement and customer engagement are the needs of the hour. “Appa and periappa could not sit at home. They started coming to the shop in July. They always say ‘Singapore is on the first floor, Malaysia is on the second floor, and Dubai on the third floor’. Their entire world revolves here. As they walk in, they touch the first step at the entrance and pray. Periappa prays and then tears a date sheet from his calendar. We don’t believe in superstitions or sentiments. We never refused our patrons when they wanted to buy clothes for funerals during the lockdown. They are our priority,” he says. With the third generation set to enter into their business, Karthikeyan believes that if they survive these turbulent times then there’s no stopping them. If the store’s humble beginnings are anything to go by, hope sure remains their guardian in this city.

An ambient shopping experience fetched them a clientele of more than a lakh, including families of multiple generations. It is this promise of respect, trust and hospitality that has clients including an 80-year-old patron returning to the store and sharing memories of shopping with her grandmother