Axe on wallet: Tax for one litre petrol stands at Rs 55

CHENNAI: As the petrol price shoots up,  Express accessing data from petroleum dealers, have learnt that a common man is  paying Rs 55.74 as tax to avail one litre of petrol – that costs approximately Rs 92 per litre in the State. While, talks are on for a Centre-State dialogue to bring down the fuel prices, the State claims that the imposition of cess last year by the Centre has resulted in petrol price hike.

The finance Minister, in the Budget for the fiscal year 2021-22, tweaked  excise duty structure to accommodate an agriculture infrastructure  development cess, whose accruals would not be shared with the states. A  top government official told Express, “The restructuring was done  so that the State don’t lose revenue if the fuel prices fall or rise.” 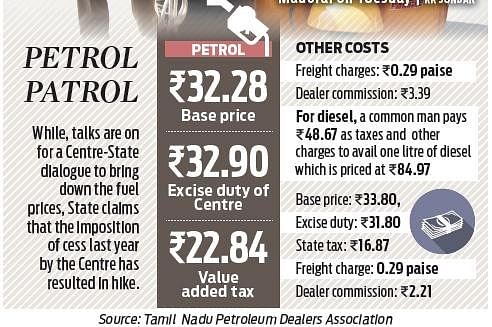 Meanwhile, the amount contributed by  excise duty to the divisible pool reduced by Rs  6.5 per litre for both  petrol and diesel. RBI in 2019 observed that the share of cess  and surcharge in the Centre’s  gross tax revenue (GTR) increased from  2.3pc in 1980-81 to 15pc in 2019-20, says PRS legislative Research, an  Independent research institute.

“This implies that of the total GTR that  Centre collects, the part that is not required to be shared with states, has increased over the years. The share of states (devolution) in GTR  has been around 35pc since 2015-16, after the 14th Finance Commission  recommended an increase in states’ share in the divisible pool from 32pc to 42pc.

While states’ share remained fixed at 42pc of the divisible pool, the size of the divisible pool and its share in GTR have changed  from year to year - with one of the major reasons being how cess and  surcharge revenue grew over the years vis-à-vis revenue from divisible  taxes,” stated the PRS report accessed by Express.

During Apr-Oct 2020, the economy contracted and GTR declined  by 17pc over the same period last year. However, despite a 20pc fall in  consumption, excise duty revenue from petrol and diesel increased by  41pc (most of it through cess and surcharge due to an increase in their  rates), the PRS report stated.

Now we are on Telegram too. Follow us for updates
TAGS
Fuel price hike