Training its lens on the forgotten school of artists and their everyday woes, ‘Bhavani Jamakkalam’ traces the fast fading history of the relic and offers a hope of revival

CHENNAI: Broad columns of red, blue and green divided by thin strips of yellow — the jamakkalam formed a ubiquitous part of many Tamil households, including yours truly’s. In our house, the thick cotton dhurrie made its appearance on cool December nights when cousins, uncles and aunts visited us, or during a summer day picnic. It received maximum attention during the nine-day Golu festival, to seat visitors.

Well, nostalgia is such a sweet joy, especially now that quilts and teakwood chairs have pushed the jamakkalam into the attic. But this memory comes with concern too — one that The Big Short Film’s six-minute short film Bhavani Jamakkalam puts the spotlight on. Let’s begin with some history.

Dating back to the early 19th century, jamakkalam is handwoven by a community of weavers from Bhavani in Erode, with coarse cotton yarn on a pit loom. Known for its aesthetic value, it got its GI tag in the early 2000s and was once upon a time procured by IKEA to sell it world over. But, with fake counterparts across the country and illegal production, the jamakkalam is fast losing its glory.

“The business of making jamakkalams might be around for just a year or year-and-a-half,” says a weaver in the film, with no hope in his eyes. It was probably their initial conversations such as these with the weavers of Bhavani that moved Shankar Vanavarayar, Amar Ramesh and the team of The Big Short Films to take steps to preserve the jamakkalam.

As children, most of us have used the jamakkalam. Culturally, now, we don’t sit down on the floor anymore. The purpose of jamakkalam is lost. Also, there is no innovation in that field. I approached my friend Shankar Vanavarayar (president of Kumaraguru Institutions) from Coimbatore to discuss this and coincidentally, this was something on his mind too.

We immediately went to Bhavani,” he shares. Echoing his sentiment is Dileep Rangan, the director of this short film, which was shot in mid-January, “Our objective is to make films where the topics need attention, give voice to the voiceless, on dying traditions, art forms and environmental wellbeing.”

In search of research
The first step to any project, academic or creative, is research. But, in this case, except for the first-hand information that the team got from the weavers, there was no documented literature. “We met the weavers and discussed how the situation gradually declined. We understood the history, the background of the people, and the entire community. Jamakkalams are sold only through cooperative societies (Co-Optex) and that became a significant point of contact.

Since there is no documentation, we are parallelly making a research document on this art and its other nuances,” Dileep points out. To make this documentation available widely, the team has launched a website. “The website has all the technical details about the thari, the cotton fabric that is used, etc. We are putting it as an open-source so future generations can read about it. All this information is gathered from cooperative societies, weavers, and people working there,” elaborates Amar. 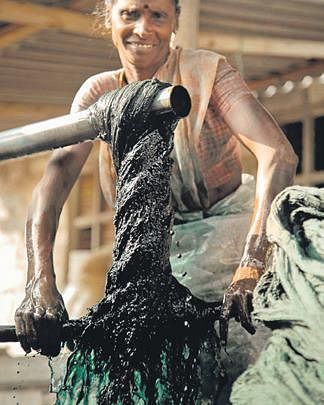 Intervening with ideas
In the past few years, the future of handmade heritage has only become bleak, especially with the legacy being shunned by the kin of artisans, who move to bigger cities for better opportunities. In the case of Bhavani jamakkalams, too, only a handful of weavers are left in the town that is nestled between the Cauvery, Bhavani and Amudha rivers. For the jamakkalams to still be relevant in the coming years, an intervention is needed, emphasises Amar.

“We don’t see ourselves as filmmakers, we see ourselves as changemakers. So, the first step is to create awareness, the second is to innovate, the third is to intervene, and the fourth step is to amplify and display it well. So, what can I do with the jamakkalam? Their colours are redundant, so can we change the colour? If cotton is making it heavy, can we add silk? Can we change materials? These are the questions we asked ourselves. Now, we are already in talks with the weavers to make an off-white jamakkalam. That is one intervention in terms of the colours used. We are also thinking of ways in which the jamakkalams can be reinvented.

So we are creating a ten-product line-up called Jamakkalam, where bags, totes, purses, passport sleeves, laptop sleeves, etc., will be made using jamakkalams. It will be released on April 14. We are also working with hammock makers in Auroville in creating hammocks using the jamakkalam. Besides all this, we are remaking a specific jamakkalam to be put on the kaithu kattil (charpai or rope bed), which you can button and unbutton to wash,” he explains, adding that all the products will be made using handloom and available on their website. And this intervention would not have been possible wi thout Shankars’s contribution to the project, points out Amar.

“The best thing about this project is that we have gone one step forward and opened Centre for Weavers. A proper building has been set up by Shankar, in Aapakudal village. A new loom has been set up there, and two weavers who are open to change have been employed. They will be doing the design that we tell them to do. The immediate idea is to pay them a daily wage that will not force them to take up other labour work by abandoning this field,” he shares. The Centre, an independent organisation, was started three weeks ago and it will fasten the intervening and innovation process. 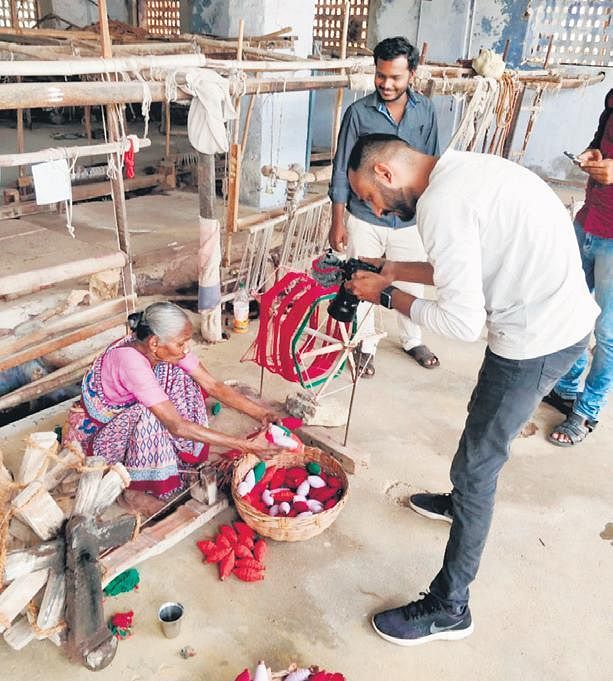 Sowing the seeds
Amar and Dileep believe that their efforts will bring the spotlight back on the jamakkalams. If viewers’ reactions are anything to go by, they are already seeing hope. While there is the challenge of bringing in youngsters into the field, they are positive that in the guise of artists and designers, the family of artisans will be supportive of the project. “Through this video, so many people have come forward saying they want to design something using the jamakkalam or make art pieces.

The first duty is to make our younger generation take pride in our culture. We are also sowing a seed in their minds to see this as something cool and do something to preserve it. If a designer sees it, maybe he can take it and use it for a font; a boutique can use it as a fabric, a wedding planner can use it for gifts. So, I have planted the seed and I am waiting to watch the tree grow,” details Amar. Their plans don’t just stop there. Amar hopes to make a bigger film that will introduce the viewers to the process and intricacies of making a jamakkalam.

“We are also passionate about documentary filmmaking, but we have always stayed with the short film format. This year, we want to do bigger films, try OTT formats, award shows and film festivals. This project, especially, is a change-making film project. So, we want to do a longer version and submit it to festivals and award functions. Only if we open it up to the world market will world designers come forward. What if a designer in Paris thinks we can do something with jamakkalam.

It will transform the industry,” he says, his voice resounding with hope. Dindigul locks, Madurai Sungudi saris and now the Bhavani Jamakkalam  GI tags or not, the keepers of Tamil Nadu’s traditions are far and few, it seems. As the views and likes continue to increase for the video, Bhavani Jamakkalam, on YouTube, we can only keep our fingers crossed and hope for the cotton carpets to not be…well, swept under the carpet.

Team work
The short film has music by Grammy Awardwinning musician Ricky Kej. “Ricky is up for being a part
of anything that is about preservations,” says Dileep. The film was screened for the weavers and a small
ray of hope has risen in their hearts. The creative team included Maverick Prem, Vinoth, Balamurali Krishna, Vivi Raaj, Surya Meenakshi Sundaram, Bhivanesh Kumar and Apoorva.

Now we are on Telegram too. Follow us for updates
TAGS
Jamakkalam