CHENNAI: Who said you need an expensive cruiser to tour the country? Apparently, you don’t even need a detailed plan — to set out on a road trip, or navigate your way through life. “If you want to do something, you just got to go out and do it,” smiles Rohith Ashok, better known as ‘Toll Free Traveller’ for his YouTube videos. The 32-year-old journeys far and wide on his motorcycle, documenting his experiences and inviting viewers into a world of vicarious adventure. He’s covered 12 countries and all States of India in his quest to travel, wander and explore.

But this wouldn’t have been possible if he didn’t quit a job he liked. As a corporate lawyer working in Mumbai for more than five years, Rohith realised he’d been toiling every year to take a two-week break that made him “feel alive”. “I realised I had a choice – sit where I am and believe life is better elsewhere; or go out and try doing what supposedly makes me happy.” 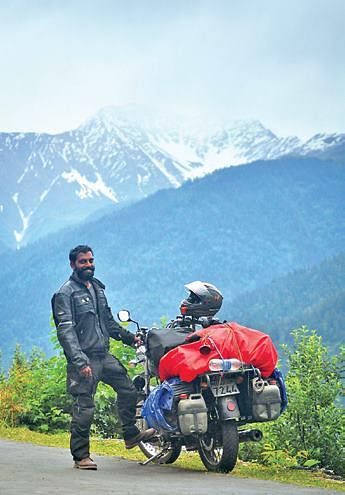 So Rohith put in his papers without knowing what next, and since he had the time, decided to do the longest ride he’d ever done — an 18-day trip home to Chennai. He ended up taking 26 days, visiting little towns and villages along the way. And the rest, as they say, is history. “That’s when motorcycling became an integral part of my life,” he recounts. “I experienced the freedom it allows you — go where you want, stop when you want, do what you want.

It’s very liberating. Now I’m doing three-month and four-month trips.” As for how long a trip is going to be, even Rohith doesn’t usually know. He often doesn’t even know where he’ll stop for the night. “Worst case scenario, I just pitch my tent,” he says calmly, and shares how he once slept on the roof of a workshop near Kharagpur when his bike broke down. His 500 cc motorcycle continued to cause trouble, and he eventually switched to the much lighter, cheaper, and lowermaintenance Xpulse 200, which also works well for the, well, “adventurous” and almost-unmotorable roads he frequents. Super-expensive, exquisite motorcycles are hardly ever Rohith’s choice.

Fancy bikes are like a baby, he jokes. “You play with them; enjoy all the good parts. And then return the baby to its parents.” But that doesn’t mean he won’t ever own a fancy motorcycle. As he continues to grow and change, so will his vehicles, he explains. So what then is his dream bike? “Whatever I own currently,” he grins contentedly. “That will keep changing. But for now, the dream is only to travel!” In other words, the journey is the destination. And as Rohith puts it, “The more you travel, the more you feel like you need to travel more.” But it’s not always smooth sailing.

Demotivation and disappointment strike even the most enthusiastic of us. “No matter what you’re doing, there are times when you wish you weren’t doing it,” Rohith admits. “Even when I’m out on the road there are times when I’m in a place that’s so uninspiring that I wonder, ‘Why am I even here?’ That usually happens towards the end of a trip, and that’s when I decide it’s time to go home.” “There are highs and lows. But I think the highs are just so good and fulfilling that eventually you find motivation to go out again; and because of social media, I have the blessing of people who sometimes motivate me. A message about how I motivated someone to do something, motivates me to do more.” Ro h i t h ’ s theme for his travel seems to be his mantra for life as well: “Draw inspiration from others. Pass some along. Keep going.”

Where did the money come from?
As a corporate lawyer, Rohith saved up for more than five years to “experiment with opportunities in life”. Then, he resigned, and changed his lifestyle. “I had to live more simply, and allowed  myself to not be worried about money constantly… As things evolve, you start seeing opportunities and ways to monetise what you’re doing.”

How does he pick his paths?
“I don’t plan too much; because when I do, things don’t work out. I only need a broad direction of where I’m going geographically. And then, I set smaller goals. For my Nepal trip, I only knew I wanted to enter from the West and travel East… I knew where I wanted to cross the border, but didn’t even
know what the bordercrossing process was.”