CHENNAI: What do you get when you pair a board game enthusiast’s love for the never-ending world of exploration it has to offer with the Tamizh ponnu aesthetics that’s intricately intertwined with an event-filled history around the Kanjivaram loom? If you were picturing silk saris with a version of Catan weaved into it oops, so close; maybe, some day.

Keeping the bar closer to accessible reality but no less exciting, the house of Mad- 4Fun Games is on the verge of presenting to the world Ettana - The Looms of Kanchi. What began as a way to find a place for herself in the immersive board game world that Madhumita Mani found beyond the rabbit hole, soon grew to be a personal project to give something back to the looms that have defined the key milestones of her life. “This all started with a trip to the US in 2015; some of our friends introduced us (she and her husband) to a board game.

That’s when we started getting into this craze of the board game world. Since we’ve been playing (voraciously) over the years, it’s always been on my mind that might one day design a board game, come up with a concept and show it off to the world. The idea behind Kanchipuram came up because I’m a Tamizh ponnu from Chennai... I’ve been a bride!...and I love saris and this tradition around it. So it got me thinking why not showcase that in the board game.

Because this art form is not so prominent nowadays (outside of the checks that consume it). A few years down the line, we’ll have our grandchildren asking what handloom is. So, I’ve taken the process of the handloom and recreated it in the form of a board game,” she narrates, outlining Ettana’s origin story. 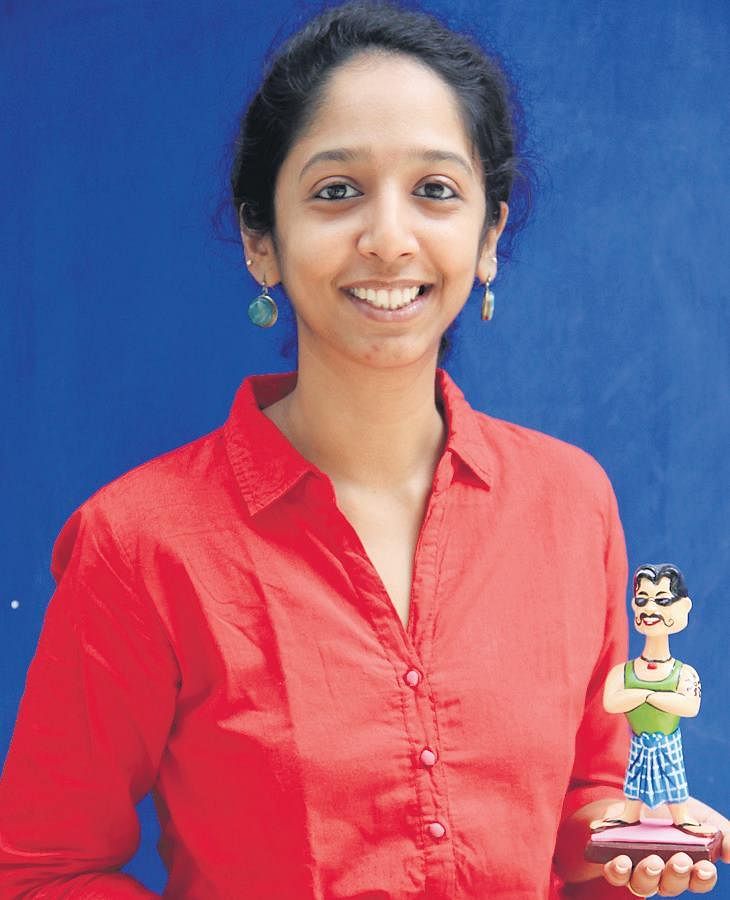 Ideas to reality
Ettana just from the first look promises to be all that. An aesthetic bombshell, Ettana is a 2-4 player part strategy- part deduction game that challenges you to create colourful handloom patterns. With its gameplay built around the roll of the dice (a number dice and a colour dice), the draw of design cards and action cards, the yarns (coloured blocks) at hand, the currency of tokens and your position on the board (determined by number tiles), it’s all set to make the process highly engaging.

Of course! After all, it took several months to perfect the play, rules and the backstory, reminds Madhu. This is where Darshini Sundar comes into the picture. The graphic designer was roped in to bring the grand ideas inside Madhu’s head to life. And Madhu couldn’t be happier with this collaboration. “The journey was quite beautiful. We threw a lot of information at her. She was able to grasp it and bring it out in her artwork and design, which was brilliant.

We started connecting in July last year and began getting the designs for each component,” she recounts. On Darshini’s part, while the chance to work on a board game (something she’d not done before) had been quite exciting, it was the subject that drew her in. Coincidentally, there’s some personal history here too. “The thing that I was very comfortable with was (the subject of) Kanchipuram. I did my Bachelors in Textiles at NIFT.

When you’re there, you work on these government projects that you don’t take seriously at that time you don’t explore as much as you think you can because you’re a student and you’re running around to finish your projects. One of the projects I worked on in my final year was something with the Tamilnadu Handloom Development Corporation.

They were creating a library of motifs and patterns, all inspired by Kanchipuram temples. So, it (this board game) was like unfinished business for me. Something I had done ten years ago, I went back and looked at the same images and photographs. The pull for me was textiles, the craft and Kanchipuram,” shares Darshini.

TN on the world map
Besides all the fun that you could possibly garner from the game, there might be more takeaway in store, it seems. Madhu and Darshini have their own hopes about it. “When I was studying in the UK, one of things my European friends would tell me they’ve been to India — it’d be Udaipur or Delhi, then Kerala. You don’t hear Tamil Nadu (on the list). This game is going to release worldwide; it’s going to hit very European markets. The idea is “don’t stop with Udaipur or Delhi.

Come down south; there’s a whole world open here.” That’s one of the reasons I wanted to work on this project,” says Darshini. For Madhu, it’s the idea of pulling the curious player into the workings of the handloom itself that holds promise. “The game is designed in such a way that it takes you through the process of handloom; even a child would be engrossed in it because it’s lovely and colourful.

And every game has an element of randomness to it,” she says, suggesting that this could get them to look past the game and into the art itself. Ultimately, the game is her way of giving back to the handloom tradition, in the most passionate way possible to her, she says. Perhaps you can attest to that when you try your hand at it.

Get the game on
The game is set to be released worldwide by end of May and is likely to be priced at Rs 2,900
(incl of taxes). For more details, visit: mad4fungames.com