An inheritance of magic

Sharanya Manivannan’s Mermaids in the Moonlight with a tender reimagining of mermaids and their
stories has plenty in store for kids, and for adults too

CHENNAI: How do you listen to a mermaid’s song? I, having been raised on the ways of a particular wizarding world, believed you had to submerge yourself in water be part of the sea that births the music. But, there’s plenty of magic to be found if you were to dip your oar into the water and hold its other side to your ear at the Mattakalappu lagoon, finds Nilavoli, Sharanya Manivannan’s protagonist.

While scientists peg the mysterious sounds to underwater currents touching a special type of shell, or the creatures that reside in them or ‘singing’ fish, Nilavoli’s Amma suggests, “Then there are dreamers like you and me who want to believe there can be mermaids in the lagoon. Fish-tailed, with a human heart.” It’s with this declaration that Sharanya’s latest creation Mermaids in the Moonlight takes off.

In a nearly ritualistic nighttime visit to the Kallady lagoon, Amma a Sri Lankan Tamil woman returning home with her child introduces the young Nilavoli to the wonders of the seas surrounding the island nation. Nestled between dreamy depictions of mermaids and mermen and merpeople, Amma tells her long-forgotten stories from all the waters of the world Melusine of Luxembourg with her twin tail, the goddess Sedna and her seaweedlike hair, the karukayan of Gurindji country, the rusalka of Eastern Europe and much more.

Sea sentiment
As I read one narrative seamlessly spill over into another, it was this quote that popped up in my head: that it’s we who divide the seas with names but it’s all just one water. The idea behind Mermaids isn’t far from that, it seems. “The quote that you mentioned reminds me of something that Alexis Pauline Gumbs wrote in Undrowned “All water touches all water everywhere”. I think the sentiment is the same. As human beings, we are primarily made of water; so, there’s a natural connection between us and water everywhere. I did have the concept of the oneness of water as I wrote. 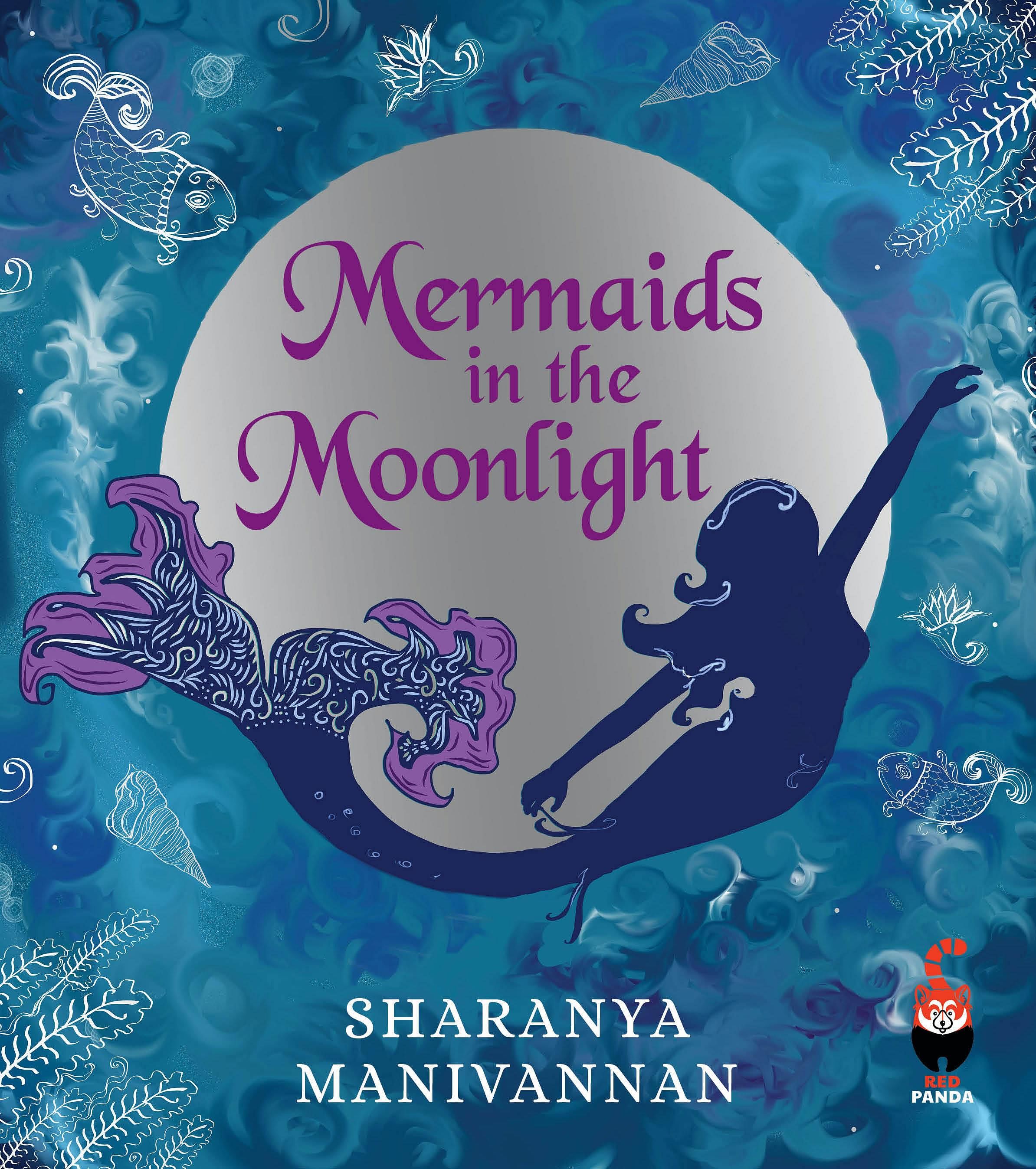 To me, the stories are not disparate they share a heart. I think one of the intricate things about reading folklore or mythology is that you see so many things that have been true for different cultures across time; ones that need not necessarily have had contact with one another. Some things are just innately true about the human experience,” she recounts, giving a glimpse into the process that brought about this illustrated work. When it comes to the mermaid experience, it was the anxious desire to do justice to the people, culture, languages and places that these curated stories originate from that had her pouring over the text and art with care and sensitivity.

While the folklores she has gathered in these pages find a place in recorded history, there are much more that have not been documented. It was this folkloric void that drew her in when she began the research for the book three years ago. “What I discovered was strange — some of the people I talked to, it hadn’t occurred to them that there needed to be stories. Because I think there’s magic and mystery, but also extraordinarily painful reality. When all these things co-exist, the weight of what is real and what is known is already heavy enough to bear.

It’s a part of the world (Sri Lanka) where there have been so many disappearances; that’s just one example. So there are those questions about one’s own land that one doesn’t have answers to. So, of course, one can live with the knowledge of not knowing who the meenmagal is or what her stories are. But, I do believe there needs to be documentation of different kinds of folklore but with a noncanonical approach. Where the multiplicity of the narrative is given focus, rather than the ‘this is it’ kind of narrative. For, every story changes with the storyteller,” she surmises.

Illustrating inclusivity
While the sensitivity displayed in the storytelling is subtle, revealing itself in the way she intersperses the lives of real women and the mythical sea creatures, it is pretty evident in the illustrations that accompany them. From a mermaid with blonde hair and blue eyes to a meenmagal with dark skin and long braid, from the plump one playing with a manatee to the hipsteresque one serenading with a merguitar, from regally-clad kings and queens to the wheelchair-bound youngling there’s inclusivity in form and spirit.

“It was very important to me that the book be visually inclusive, and not just textually so. Different kinds of bodies, skin colour, abilities...it was important for me to reflect that. We lose something when we only see one kind of depiction, especially when it comes to a character like a mermaid who is presumed to be beautiful. That’s why it is important that children also see this diversity. It’s so fortunate now that picture books and children’s literature in this part of the world have become diverse and inclusive, including the socio-political issues engaged through the work,” she shares.

This book marks her debut in the world of illustrations. While this might be a huge milestone for the eager observer, to Sharanya, it only seemed like the natural extension of her work. “I have been drawing and painting for a long time, nearly 20 years now just for myself and friends. It’s just something I’ve always done. It was only when Mermaid was coming together as a book that I recognised it’s actually a new medium I’m venturing into,” she recounts. 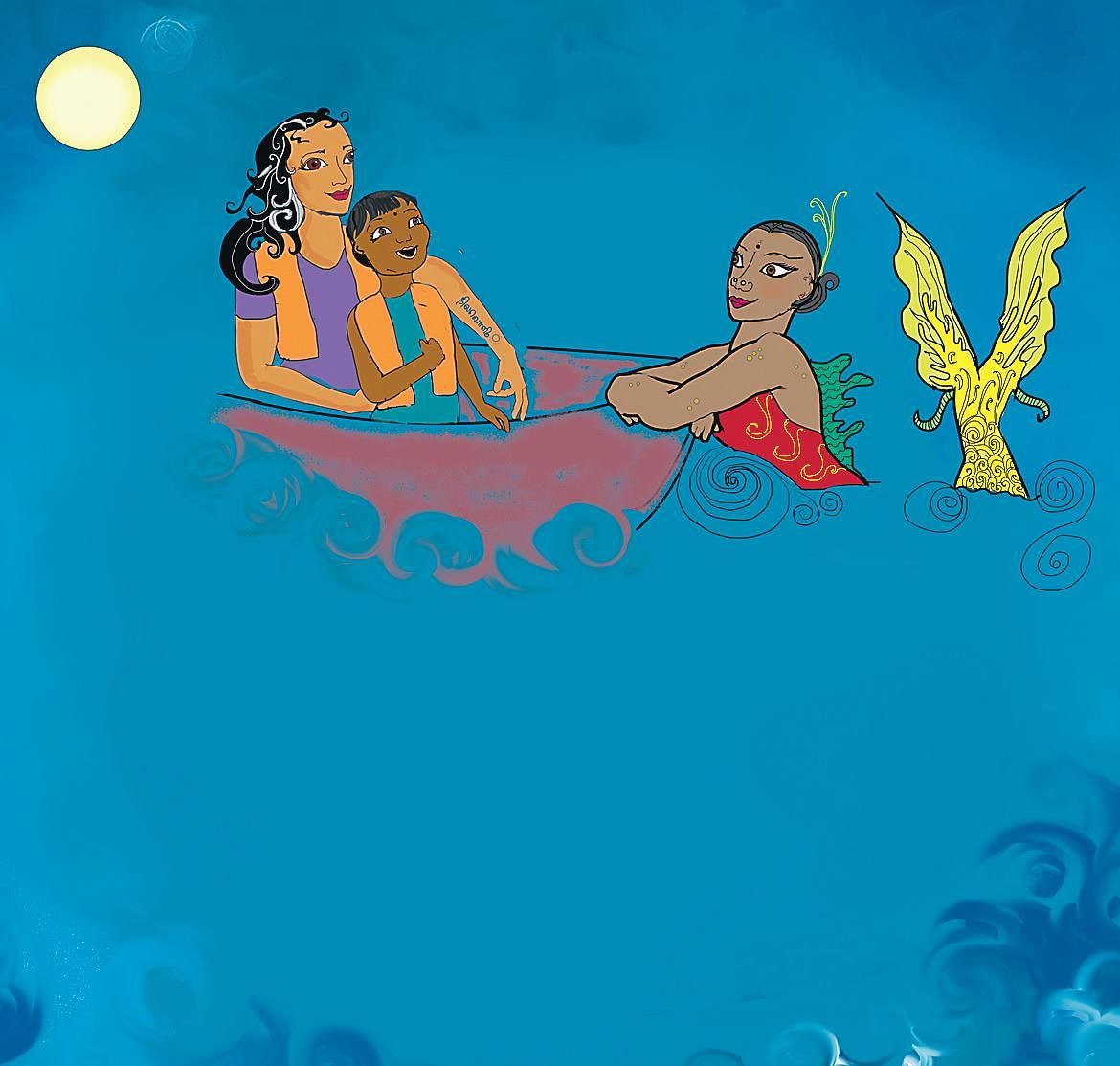 Myths and mystery
Nestled amid the magic of mer-beings and the mysterious depths of stories from foreign lands is the tender tale of a rite of passage, an initiation into wonder and otherworldliness. A rarely seen depiction of the mother-daughter dynamics that will serve as your anchor in the vast sea of what-could-be. And it was, Sharanya says, by design. “I think the book is really a parent giving their child an inheritance and that’s how a couple of different themes in the book come out. One is that they are members of the Ilangai Tamizh diaspora; this would be the first time the child is visiting the mother’s home.

They live somewhere else and this is a way for the mother to take her child home and talk about the erstwhile matrilineal culture that has all but disappeared now. This also becomes a part of that lineage; this mother gives the daughter the stories, takes her to the lagoon, gives her this experience when she is old enough to remember it. And Nilavoli is adopted; there are some things about her origin that she will never know.

That’s partly why the mystery of the meenmagal and the larger mysteries around “Does the mermaid exist?” “What are they like?” “What is Ila like?” resonate with her. What Amma does is essentially give Nilavoli ways to hold gently what cannot be known and be okay with it. So yeah...I put a lot of love into that relationship,” she recounts. Not that you need her to say it out loud when the book hands it to you, page after page. All this when Mermaid was not imagined as a story of its own. Having started work on Incantations Over Water, Sharanya had only thought that there would be plenty of illustrations spilling over and she would be able to carve out a children’s book from it.

But, she says, Mermaid demanded to be a story in itself. For those of us left wanting for more, there’s an adult experience with mermaids coming up. “Incantations Over Water is narrated by Ila (the meemagal in Kallady lagoon in Mermaid). It’s a completely different book — it’s visually different, it goes deeper into some of the things which are just skimmed in this one,” she shares, only adding to my already piqued interests. Until that book hits the shelves, I shall make do with rereadings for Mermaids in the Moonlight. I suggest you do the same.

Pick it up now!
Mermaids in the Moonlight
Publishers: Red Panda, an imprint of Westland Publications Private Limited
Price: Rs 199