An assembly for art and heritage revival

While struggles have been aplenty for the young artiste, the biggest one, he says, has been a lack of precision tools.

CHENNAI: From the sounds of handlooms slowly disappearing to the pottery industry breaking, over the past year, the country’s traditional artisans have been locked out of their livelihoods, furthering their struggle for survival. In a world that is fast-moving towards forgetting the country’s traditional creatives community, the need for artisan-based intervention has become a thing of prime importance, now more than ever.

In line with the thought that art can only thrive when artisans thrive, individuals from different fields and walks of life have been contributing and working towards reviving the state’s culture and heritage through art forms set in wood, stone, fabric and film. To bring their works to the fore and to draw inspiration from their experiences — to create and nurture a conducive ecosystem for craftspersons in the future, SPI Edge, the Chennai Chapter of Arts and Culture Resources of India (ACRI)  (by Art-x co) curated a digital panel discussion on Wednesday.

“It is important to create an ecosystem where artisans can thrive, be financially stable and sustain their craft. The idea for the discussion was to enable anyone interested in heritage, art and culture towards the journey, and together start more dialogues. All the panellists have been able to address the issues at their respective levels,” said SS Sriram of SPI Edge.

“The journey was dotted with several struggles and challenges. However, support always came from different pockets. During this interesting journey, we have been able to standardise our processes, gain the trust of the artisans, who’ve formerly, unfortunately, been exploited, and build a rapport with clients, who’ve believed in our approach,” shared Sundari, who has been at the forefront of facilitating architectural projects with red oxide flooring with the help of artisans, and reviving it.

For Tharun, an independent musician and luthier, whose life has been revolving around bringing back and, to a capacity, modernising long-lost traditional instruments like the yazh, his dream has been to take the instrument to a global platform. “We want to create a music ecosystem that supports these instruments. For instance, we don’t want to just make these traditional instruments from yore but want to work on releasing music videos, creating artistes, recording sounds that have been unheard by generations, and find other ways to express music. New ways of visualisation and modernisation (not westernisation) will what, going forward, keep the instruments rolling,” he said.

While struggles have been aplenty for the young artiste, the biggest one, he says, has been a lack of precision tools. “Every instrument is handmade. While it adds to the indigenous nature of the instrument, when it comes to mass production, it will be tough to achieve numbers. So, creating specific tools could solve several problems. Another issue has been the task of sourcing materials,” he detailed.

With a PhD on the Patteda Anchu sari, Hemalatha, in over the last decade, has been instrumental in reviving several age-old saris and weaving techniques. “From people initially not accepting to work on a traditional pit loom, creating prototypes, finding a market for these weaves to a lot of inflexibility, there were several challenges. Now, things have changed. Persistence has been the key,” shared Hema, who has not only revived the art but also generational artisans who had left the trade for better opportunities.
Amar, who has been creating a visual repository of heritage structures, arts and crafts, narrating stories of their origins and current state, said that the focus should turn from mainstream to the lesser-known.

“We see many aspects of our heritage and many traditional arts disappear or inching towards extinction. One example is the Bhavani jamakkalam. It was for the very reason — to save it, preserve and create awareness that we, the team at The Big Short Films, decided to make a short film about it. While people have responded well to the video, it’s not getting the same response a meme or a video of no-value gets. When we can forward a troll video several times, why can’t we popularise content that talks about a dying art or tradition? It could be a small step towards revival,” he said.

The way forward, for Amar, is to not just be a filmmaker but to be a changemaker. “For those interested in the cause, take it up in any capacity possible. When you put yourself out there with all your heart, you will get the support and the cause will benefit,” he shared. 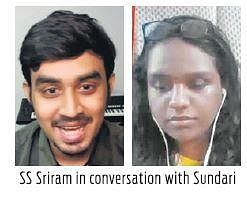