If Doorstep Delivery is implemented, no citizen of Delhi will have to stand in queues for services listed under the scheme.

The LG has returned the file with suggestions and has asked the government to reconsider it. On Wednesday, Delhi’s Deputy Chief Minister Manish Sisodia gave a point-wise reply to issues raised by LG.

Briefing the media, Sisodia said he had been “extremely saddened” after reading notings of the LG. “I am unable to understand why the honourable LG has a problem with residents of Delhi getting delivery of services at their doorstep? The basic question that arises is that should an LG have the power to reject a major decision of the elected government?” Sisodia asked.

Baijal countered by saying that he has not rejected the proposal for doorstep delivery of services and his office has only advised the government to reconsider the proposal and suggest alternate model. “The present proposal has implications for safety and security of women and senior citizens, possibility of corruption, bad behavior, breach of privacy, loss of documents, etc, and adds unnecessary expenditure for the government and the people. Digital delivery of services’ most effective tool to eliminate corruption as it removes human interface, minimizes delays and discretion,” Baijal said.

Doorstep Delivery enables citizens to avail government services at home. If it is implemented, no citizen of Delhi will have to stand in queues for services listed under the scheme. Initially, it has been planned to include 40 services on the day of rollout. The Delhi Cabinet approved the scheme on November 16. 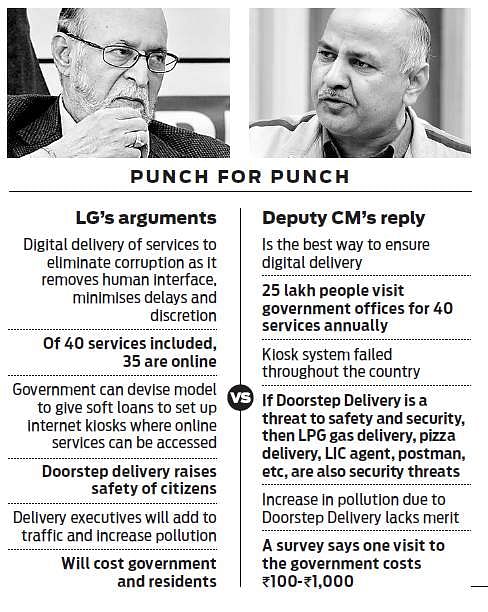 Stay up to date on all the latest Delhi news with The New Indian Express App. Download now
(Get the news that matters from New Indian Express on WhatsApp. Click this link and hit 'Click to Subscribe'. Follow the instructions after that.)
TAGS
doorstep delivery system AAP LG Delhi government