Christian cemeteries in Delhi running out of space

Of the total cemeteries, only five are open to all Christians in the city, whereas five of them are open only for family graves/doubling.

NEW DELHI: Christian cemeteries in the National Capital need urgent attention as most of them are running out of space, the Delhi Minorities Commission has warned, as it seeks remedial measures such as adoption of modern burial techniques. After a survey of all the Christian cemeteries in the city, the commission has found that that there are only 13 operational cemeteries out of which one — Lothian Cemetery at Kashmiri Gate — has been closed and has been declared as a protected monument.

Of the total cemeteries, only five are open to all Christians in the city, whereas five of them are open only for family graves/doubling. Also, two of these cemeteries — one in Okhla and the other one in Mehrauli — are open only for pastor families and members of the Church of North India respectively, the study says. 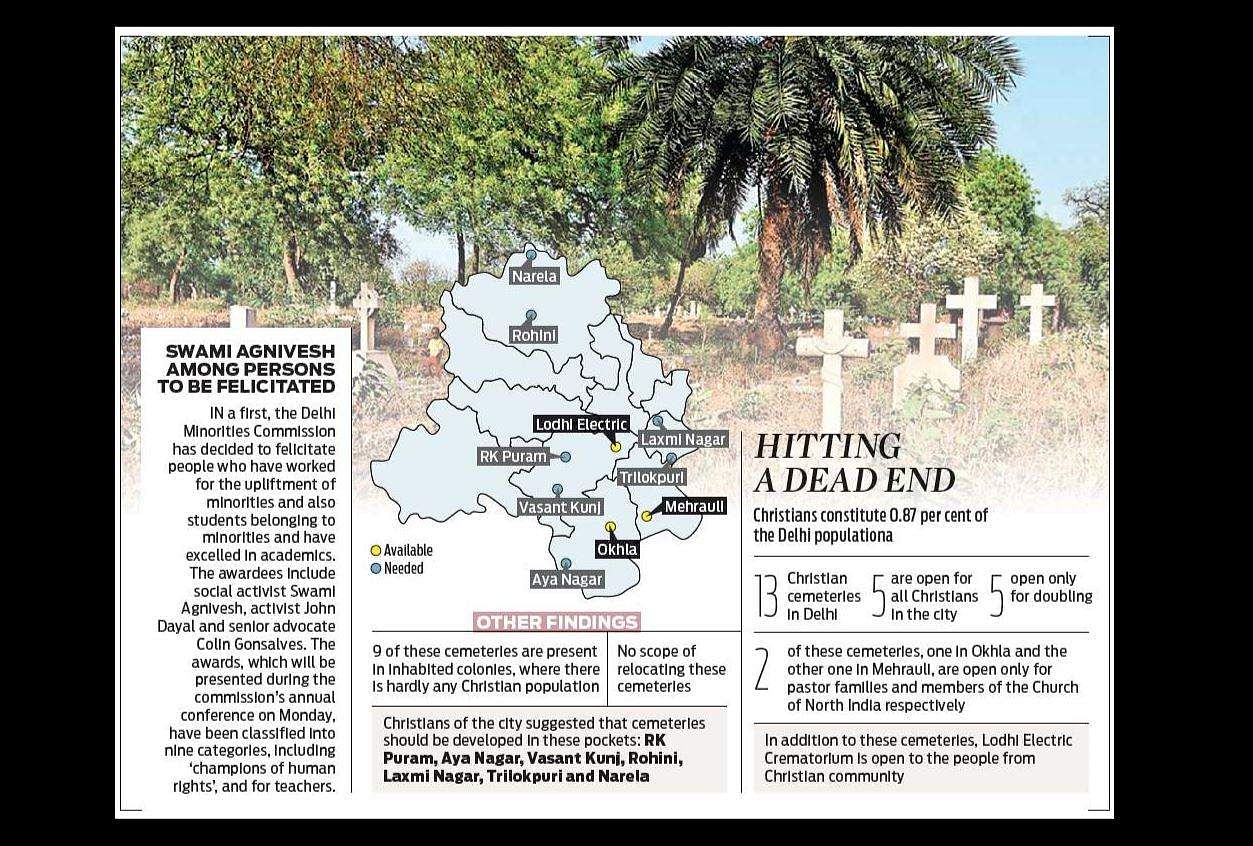 The study, which was released by Commission Chairperson Zafarul Islam Khan on Friday, also pointed out that nine of the thirteen cemeteries are present in “inhabited colonies” where there are hardly any Christians. “There is an acute shortage of the cemeteries in Delhi which are open to all the Christians to cater to the growing needs of the Christian population. Moreover, the ones which are new like the Indian Christian cemetery in Burari are remotely located and thus not preferred,” states the study.

It adds that there is no scope for relocation of these cemeteries due to scarcity of land in areas which have significant Christian population. Resultantly, many times, Christians, comprising 0.87 per cent of the National Capital’s total population, have to travel long distances in the city to rest their dead. “For instance, people from Central Delhi have to go all the way to Burari or Dwarka,” the report says.

The commission has also highlighted that management of existing cemeteries is a problem, which needs to be taken care of. Another concern cited by the commission is safety and security of people visiting the cemeteries.

The commission has made a slew of recommendations to improve the situation.  The panel has suggested adoption of modern burial techniques. It has also asked authorities to make efforts to take back control of the cemeteries which have been closed.

Now we are on Telegram too. Follow us for updates
TAGS
Christian cemeteries cemeteries Delhi