In a bid to combat rising pollution levels in the national capital, the state cabinet approved the Electric Vehicle Policy on Monday.

NEW DELHI: In a bid to combat rising pollution levels in the national capital, the state cabinet approved the Electric Vehicle Policy on Monday.“We aim to transform the national capital into the EV Capital of India. Vehicles are the biggest source of pollution in the capital and amount to 40% of PM 2.5 air pollution levels and 80% of carbon monoxide in the air. The comments of experts and general public were incorporated in the formulation of the policy,” Chief Minister Arvind Kejriwal said.

Delhi Electric Vehicle Policy 2019 aims to induct electric vehicles which will contribute to 25 per cent of the newly registered vehicles across the city. “Along with reducing pollution, the policy also aims to generate employment in the transport sector. The maximum emphasis is laid on two-wheelers, public transport and shared vehicles, and goods-carriers,” said Kejriwal. 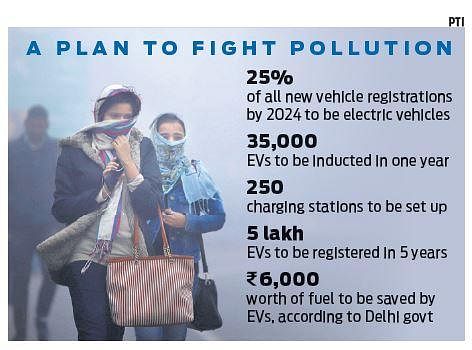 According to the CM the current strength of electric two-wheelers is less than 0.2% of all vehicles and that of three-wheelers is almost zero but with the new policy, over 35,000 electric vehicles are planned to be inducted within the next one year. These will be accompanied by 250 charging stations across the city. “Over their lifetime, these EVs are estimated to save `6,000 crores worth of fuel and liquid natural gas consumption.”

Under the EV Policy, the state government is providing a subsidy of `5,000 per kWh of battery capacity on the purchase of two-wheelers. All two-wheelers engaged in last-mile deliveries, such as food delivery vehicles, courier services, and e-commerce logistics, will be expected to transition 50% of their fleet to electric by March 2023.”

For the policy implementation, a dedicated EV cell will be established within the transport department.

More from Delhi.
Now we are on Telegram too. Follow us for updates
TAGS
Delhi CM Arvind Kejriwal Electric Vehicle Policy