Cow-tastrophe for residents of Vijay Nagar in Delhi

An abundance of stray cattle, potholes, and parking issues are just some of the hassles faced by residents of the area

NEW DELHI: Herds of cattle and encroachments make it difficult for the residents of north Delhi’s Vijay Nagar to even walk on the roads. They also blame cattle tied to poles on roads for being the cause of several accidents.

Residents’ Welfare Association, Vijay Nagar double-storey,  president Naresh Sarin told this newspaper that a lack of parking space resulted in encroachment.“Unauthorised parking causes traffic snarls. We were hoping to get underground parking somewhere. Whenever there is an event in the colony, we are compelled to use the colony park to park our vehicles,” Sarin said.

He further said that there were no speed breakers in the area even though applications were submitted to traffic police. The area, owing to its proximity to North Campus, has a good number of youngsters. “Young boys drive rashly on the roads. There are no speed-breakers. It causes problems for senior citizens,” the 68-year-old said.

His son Rajeev said that a lack of parking space often resulted in altercations among the people. He listed potholes and poor sewer line as other problems plaguing the area.

“These roads were repaired about a month ago and look at the potholes. What does that mean? There is permission to construct buildings till first floor, but the people have constructed more floors, making the sewer line insufficient,” Rajeev said. He complained that patchwork done in the day were destroyed immediately.

Rajeev added, “Is this place worth living? They have encroached roads to make space for cattle. During MCD inspection, the owners make space for them in the ground and save themselves from facing
any action.”

Raj Bhutani, 60, a housewife, complained about the lackadaisical approach when it came to cleaning the area. “It is cleaned each day, but not properly,” Bhutani said.

Another resident Ravi Chawla, a businessman, complained about the narrow roads due to unauthorised parking.  “People from other areas park their bikes and cars here. We don’t even know who these vehicles belong to. Students and others from different areas occupy the roads. No action is taken by the government. Both the councillor and the MP are incompetent,” he fumed.

KL Chaudhary, a businessman, spoke about the broken sewer covers. “It can be so scary with children around. They can fall into these.”

Sarin said that all these issues deserve the attention of the government. “The elections are coming. At this point, politicians will come and start appealing for votes on all sorts of issues. They need to pay attention to the real issue of infrastructure. We hope that there is some difference soon.” 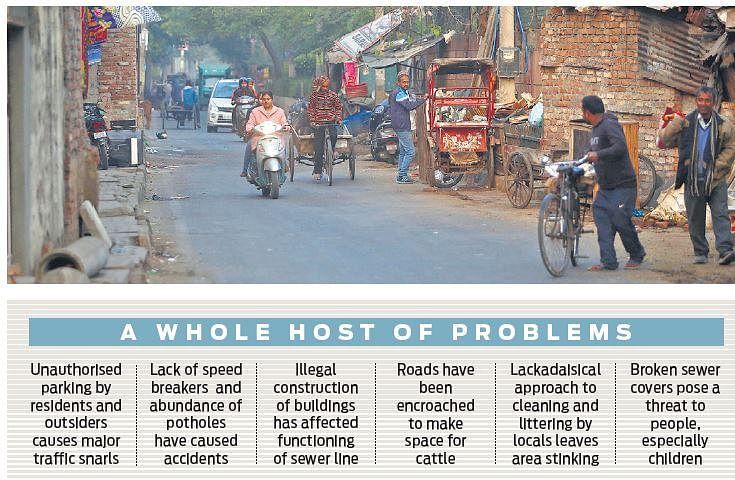 Now we are on Telegram too. Follow us for updates
TAGS
Delhi cows Vijay Nagar