A stamp of history from the Nizam’s era

The use of exquisite calligraphy, multifarious languages and architectural tropes in these stamps demonstrates the far-reaching influence that Hyderabad had on the other Princely states.

Almost eight decades before the first stamp of independent India was issued on November 21, 1947, the seniormost Princely state in colonial India, Hyderabad, was already printing its own stamps. Hyderabad began doing so in 1869 and continued with it till the time it became a part of the Indian Union, in 1949. Interestingly, a wide range of postage stamps evolved during this time, in different colours, values, inscriptions and sizes, depicting the varied aspects of the state.

You can now have a look at all these rare stamps, printed by the successive Nizams of Hyderabad, and, in a way, explore the history and culture of the Princely state, right here in Delhi. An exhibition titled Property of a Gentleman, Stamps from the Nizam of Hyderabad’s Dominions is being put up by the Gujral Foundation, at Bikaner House from March 9-24. 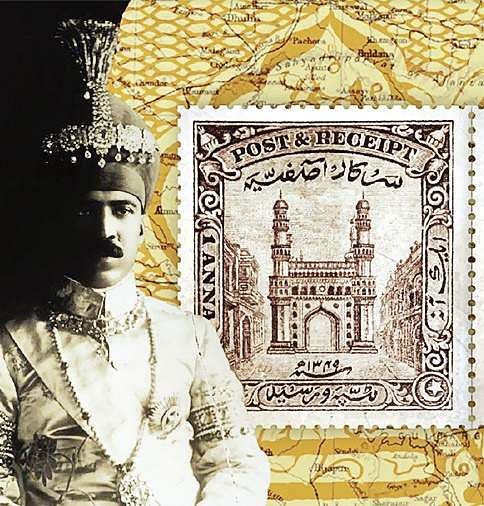 Included in the exhibition is the very first and the last stamp issued by the Nizam’s government in Hyderabad, the extraordinary Penny Black (the first adhesive postage stamp in the world) and the  King George VI series of Indian postage stamps depicting different modes of transportation that were used to deliver mail. Then, there also are stamps featuring monuments from across the Nizam’s expansive dominion as well as those that were issued to commemorate the victory of Allied Powers in World War II.
“Since parts of Maharashtra also fell under Nizam’s rule, some of the stamps show Ajanta Caves, the great Hindu gateways of Kakatiyas at Warangal, Daulatabad and Chand Minar. Plus, in the 20th century, the Nizam also built a lot of important buildings like the High Court and a number hospitals. All these were also featured on stamps,” says curator Pramod Kumar KG.

And along with all these rare and original postage stamps from Hyderabad, the exhibition will also have valuable and related ephemera such as original letters, postcards, revenue stamps of the region, erroneous stamps, seals and monograms. The use of exquisite calligraphy, multifarious languages and architectural tropes in these stamps demonstrates the far-reaching influence that Hyderabad had on the other Princely states.

Significantly, all these stamps belong to Ewari collection, an iconic assortment of philately, comprising more than three million stamps, dating back to Nawab Iqbal Hussain Khan, the postmaster general under the seventh Nizam of Hyderabad.

“The philately collection from the Ewari family has a deep and personal connect with Hyderabad. It was their grandfather, Nawab Iqbal Hussain Khan, who began collecting stamps. Apart from stamps of Hyderabad, his collection also included unusual and representative pieces from other former Indian Princely states. Why we are bringing this collection here is because Hyderabad stamps have not actually been seen and exposed the way the stamps from other states have been,” says Kumar, adding that this is the first time that such an exhibition is being held in India. “We want people to get an essence of the history of Hyderabad through its stamps,” says Kumar, adding, “unlike other states which used the face of the kings on its stamps, stamps from Hyderabad didn’t follow this tradition which is very unique. Instead, it depicted ancient monuments.”

“It is a professionally-managed stamp collection and will be displayed in museum-like conditions because of its historic value,” says Kumar, adding the show might travel to other cities.

Now we are on Telegram too. Follow us for updates
TAGS
Nizams Nizams of Hyderabad Stamps