Along with the bouquets, climate change activist Greta Thunberg has received many brickbats. Few voices ponder over how this lack of civility, etiquette and responsibility from Internet trolls will ge

There is no question that climate change is happening; the only arguable point is what part humans are playing in it,” said British naturalist Sir David Attenborough.

While we pondered on how climate change is a global crisis, 16-year-old Greta Thunberg took it upon herself to spread awareness about the issue by skipping her school. Later in September, Thunberg, now a global icon of climate activism, spoke at the United Nations Climate Action Summit 2019, questioning the world leaders present and talked about how we have entered the beginning of mass extinction.

While Thunberg was successful to garner global attention on a critical issue, the trolls weren’t far. As the internet saw an inflow of memes calling her an ‘elite pawn’ and a ‘communist actress’; few even went as far as to mock her for suffering from Asperger’s syndrome, obsessive-compulsive disorder and selective mutism.

Barking up the wrong tree?

Apeksha Priyadarshini, 27, feels that a 16-year-old girl, deciding to skip school to talk about climate change and hold world leaders responsible should be a moment of reflection.

“Those in power in the government aim at ambitious capitalist projects with no concern for our collective well-being. Every year more states in the country are being submerged under floods. Millions of hectares of forest land are being cleared in Chhattisgarh and Maharashtra for mining and bullet trains…” 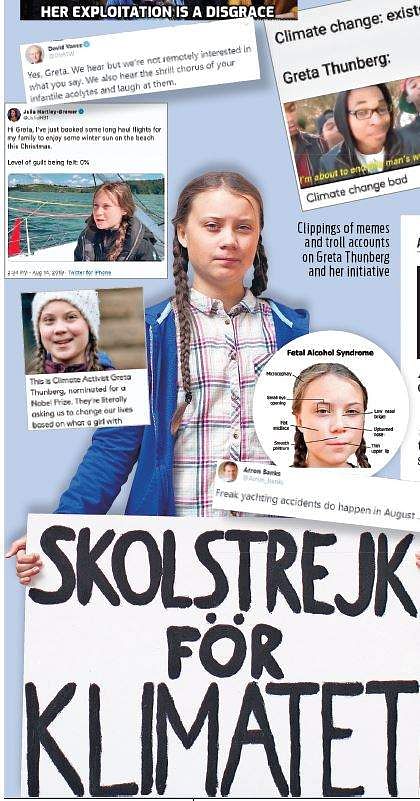 The PhD student of Cinema Studies, JNU, adds how the Thunberg’s resolve should compel us to ask our governments some tough questions.

“The reason Greta is being criticised is that they cannot tolerate the unsettling this movement is giving rise to among the common people, especially the young. It isn’t simply about individualistic efforts towards reducing carbon footprints, but leading to a need for structural upheaval with policy-level changes that the state must look into for sustainable transformation of the economy that will benefit the environment.”

Echoing this concern is Sumit Pratihast, a vocalist, who feels that anyone who disagrees with what Thunberg so poetically expressed at the UN climate convention is either unaware of the scientific research on climate change or is living in complete denial.

“Brittle egos and tempers running high are not the signs of a mature and collectively intelligent society. And as long as we stay in this trap, we are slowing things down for everyone. The internet society needs to learn civility, etiquette and responsibility,” says Pratihast.

Mohit Kumar, 24, a student of European studies, feels that we are entering an age where an argument or opinion is not considered on its merit, rather people tend to label you as associated with a particular group, party, community or ideology.

“This is the new norm and divisions are widening. Climate Change is one issue which deserves our bi-partisan attention and support. Our very future depends on it.”

Explaining this behavior of discrediting the people vocal about grave concerns is Nakshatra Pachauri, author of Post Zombieism – The Social Media Horde. He believes that in this one-click opinion posting era we live in, the whole discourse gets focused on the ‘symbol’ (form) rather the symbolism (substance).

“Social Media prospers on visual and audio stimuli, and while attention spans keep decreasing, only the ‘visual’ is remembered. Considering the hugely divisive political landscape, all symbols thus turn political. This is where opposition gains by therefore keeping the conversation on the symbol alone.

As soon as a story starts going viral, a counter-narrative is thrown in, and the form (symbol) raising the issue (substance) is mocked or defended. There’s no middle ground. While the discussion remains only on the symbol, the symbolism dies a slow death,” concludes Pachauri.

Stay up to date on all the latest Delhi news with The New Indian Express App. Download now
TAGS
Climate Action Greta Thunberg