The bacterial strains can decompose polystyrene—a key component of single-use plastic items such as disposable cutlery, toys, and packaging materials.

NEW DELHI: Researchers at Shiv Nadar University in Greater Noida have discovered two strains of ‘plastic-eating’ bacteria in the wetlands of Greater Noida, which may lead to the development of eco-friendly methods to dispose of plastic waste worldwide.

The bacterial strains can decompose polystyrene—a key component of single-use plastic items such as disposable cutlery, toys, and packaging materials.

Polystyrene is resistant to degradation due to its high molecular weight and long-chain polymer structure, and so it persists in the environment, according to the study, published in the journal Royal Society of Chemistry (RSC) Advances. 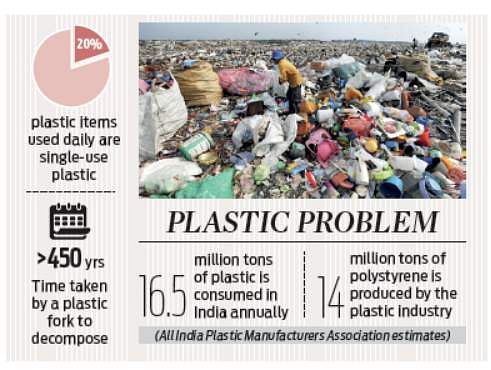 “Our data support the fact that strains of extremophile bacterium Exiguobacterium are capable of degrading polystyrene and can be further used to mitigate the environmental pollution caused by plastics,” said Richa Priyadarshini, Associate Professor at Shiv Nadar University.

Priyadarshini discovered the bacteria strains along with her team at the Department of Life Sciences, School of Natural Sciences.

When they come in contact with polystyrene, the two isolated bacteria strains use it as a carbon source and create biofilms. This alters the physical properties of polystyrene and initiates a process of natural degradation with the release of hydrolysing enzymes to break the polymer chains.

Biofilms are an assemblage of bacterial cells which grow as communities, reaching very high cell densities, which leads to more targeted and localised action of polymer degrading enzymes.
The researchers said both the bacterial strains were able to establish biofilms on polystyrenes surfaces. “Biodegradation is a process by which microbial organisms—mainly bacteria and fungi—transform or degrade chemicals introduced into the environment,” Priyadarshini said.

“What started as a scientific exploration of the wetland in our campus has led to this significant discovery of plastic-eating bacteria,” said  Rupamanjari Ghosh, Vice-Chancellor, Shiv Nadar University. “Polystyrene is quite recalcitrant to degradation and requires some form of pre-treatment like chemical, thermal, photo-oxidation prior to biodegradation,” said Priyadarshini.

Both DR11 and DR14 strains were able to not only form biofilms on non-treated polystyrene but were also found capable of degrading unmodified plastic, researchers said.