CM Arvind Kejriwal thanks Delhiites for keeping dengue in check

According to the Delhi government, experts had earlier warned of the possibility of deadly dengue strain this season.

NEW DELHI:  With no dengue deaths so far and number of dengue cases lower than last year, Chief Minister Arvind Kejriwal credited the residents for controlling the spread of the vector-borne disease.
According to weekly data shared by the municipal corporations, 467 dengue cases were registered as compared to 830 in the same period last year. 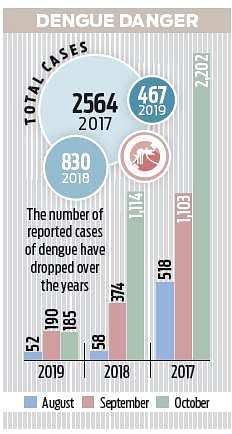 According to the Delhi government, experts had earlier warned of the possibility of deadly dengue strain this season. “Keeping this important warning in mind, we (Delhi government) had directed the concerned departments to be ready,” said Kejriwal.During a press conference on Sunday, the CM had said, “This year, fortunately, there is no spike in dengue cases and it is because all the people have come together, from the Delhi government to the Centre and the MCDs”.

A government statement said, “Data shows that there has been a steady decline in cases of Dengue in Delhi since 2015, when the disease claimed 60 lives, but this year Delhi has controlled dengue beyond all expectations, and even the final number of cases is expected to be very low.”

However, other vector-borne diseases are on the rise compared to previous years. According to data, there have been 214 malaria cases in September compared to 138 last year in the same month.

Stay up to date on all the latest Delhi news with The New Indian Express App. Download now
TAGS
Arvind Kejriwal Delhi dengue