Water warriors of India get a voice

For women, the water crisis is more personal and far bigger than any development or scientific agenda.

How ironic is it that women – the ‘primary water collectors’ the world over – who spend almost 200 million hours collecting water every day in low-income countries, don’t have access to a single drop themselves. Reflective of the sardonic truth of our times is how a few years ago in Denganmal, Maharashtra, men were engaging in polygamy to get ‘water wives’ to ensure enough water in their house.

For women, the water crisis is more personal and far bigger than any development or scientific agenda. At the recently concluded WADE Asia (Women in Architecture Design and Engineering), Asia’s largest celebration of women-led developments in architecture, art, design and engineering, the subject of women and water emerged as the most potent.

Besides creating a world record in the Asia Book of Records on October 12 with over 500 women standing together to form the letter W, at NSIC ground in Delhi, as an ode to women water warriors of the world, it also recognised the work of those striving to counter the water crisis.

There was Chitra Vishwanath from Bengaluru who talked about Architecture of Water and Waste, while Mittal Patel known for reviving over 87 lakes in Gujarat, shared her work done in various villages. 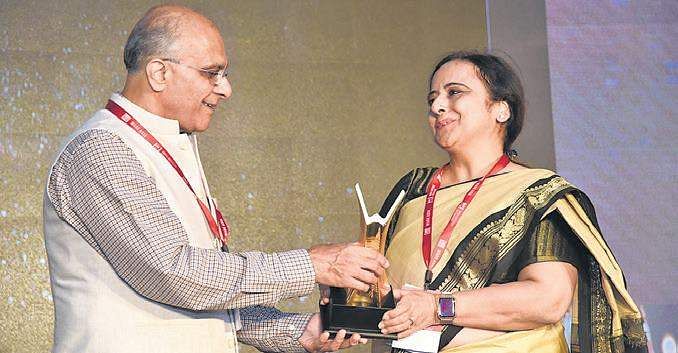 “The highest WADE Asia award for lifetime achievement was given to Amla Ruia, Founder of Aakar Charitable Trust, also known as ‘Water Mother of India’ for her special contribution as a water warrior. She and her people have positively impacted 64,4000 people in 518 villages by creating 368 check dams in India,” says Vertica Dvivedi, the Founder Director and Chief Curator of WADE Asia adding, “We have called for submission of projects and intend to work on water projects from January 2020.”

To start with the projects will follow a two-fold approach. The first would be awareness missions to make women water warriors water literate and second will be promoting and executing roof water harvesting projects in societies.

At the core of it all is the thought of enabling women to become water entrepreneurs from water carriers. This gendered burden not only disallows them to conduct household chores efficiently but also keeps them economically disempowered as none can take jobs.

With that said, the serious health implications of carrying water are also under-documented. “What’s required is independent forums deliberating on this crucial subject. Policy revision is the need of the hour and fundamentally we need disaggregated data on women and water that can help devise precise solutions,” she says. Currently, there’s a clear divide between the way urban and rural water initiatives are taking place. Many NGOs and activists are working in silos. Strategically mobilising all these different initiatives could create a big impact, Dvivedi feels. But she believes that things are changing especially with the involvement of urban women water warriors. “As a gender, women are more sensitive to a crisis, saving and conservation. Water literacy is the primary solution. And I think, coming together of women for causes that they believe in, can be revolutionary if directed well and facilitated with resources. Look at the example of Jal Sahelis and how hundreds of women from Bundelkhand came together to turn their villages from water-scarce to water sufficient,” she says.

It was all about bringing possibilities to the table this year at WADE Asia. It has also created a blueprint for future action. ‘Creating liveable cities, addressing crisis in architectural education were some of the other points of discussion but at the essence of it all was the idea of ensuring visibility for women-led projects, bridging mentorship between leading and aspiring designers, facilitating the come back on women into the professional space, and of course, celebrating the contribution of the many invisible women who need a silver lining.

Five women participants who are leaders in the fields of architecture, art, engineering, and special category:

One of the first women architects in India to start her practice, Shilpa Architects. She is also the first Indian architect to serve on the World Economic Forum’s Global Agenda Council on Design Innovation. An architect, dancer, an ardent follower of sustainable design practices, she was conferred with WADE Sustainability Champion Award for her contribution to sustainable design.

Artist, founder of Millenium Studio, Partner at ABM Architects Mumbai, Miller has been instrumental in taking the Kala Ghoda Arts Festival, Mumbai, to its present popularity. This year, she was on a panel discussion about the connection between art and architecture.

An ardent believer of sustainability, Vishwanath has always focussed on creating architectural designs that made use of indigenous natural resources like mud. Both her ventures, Biome Environmental Solutions and, Biome Trust focus on ecological and social issues in each project.

Nela de Zoysa, the principal of Design Corp is a multi-faceted personality and a big name in architecture – both inside her homeland, Sri Lanka and abroad.

This civil engineer from IIT, Delhi, has exhaustive  experience in especially earthquake resistant design of structures. Her prior stints with firms like RITES and AECOM has seen her carry out engineering design, architecture and project management for stadiums, auditoriums, swimming pools, residential, commercial and industrial developments. Wij was awarded the WADE Engineer of the Year 2019.

Stay up to date on all the latest Delhi news with The New Indian Express App. Download now
TAGS
Women in Architecture Design and Engineering