Three old-age homes, recreation centres for elderly to open by November in Delhi

Once the 29 new recreation centres for the elderly are up and running, the total number of such facilities across the national capital would rise to 133.

The centres are equipped with a game room, library and a physiotherapy section. They will also afford space for the city’s elderly to indulge their hobbies and take part in other leisure pursuits. There will also be an opportunity for them to learn new-age ways of staying connected such as through the social media. 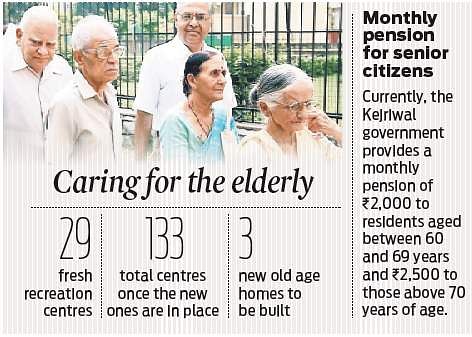 Once the 29 new recreation centres for the elderly are up and running, the total number of such facilities across the national capital would rise to 133. The social welfare department is currently in the process of examining proposals of NGOs, which have evinced an interest in running these old age homes.

Residents’ welfare associations (RWAs) and similar organisations, which have been registered for more than three years and are interested in running these recreation centres, can also apply to avail the benefits of a government scheme to this end. As part of the scheme, the government will allocate `75,000 each to these organisations as a one-time grant.

Coming just months ahead of the Assembly elections, the move is being seen as part of the continuing efforts of the ruling party to woo senior citizens. The government has announced several measures, including a scheme to send batches of elderly residents on a free pilgrimage every year, to win their support.

The three old-age homes will come up in Kanti Nagar, Lampur and Wazirpur areas. Chief Minister Arvind Kejrwal is personally monitoring the progress of this project and has also called for an elderly to be the points person through whom senior citizens can complain about pension not reaching them on time.

Stay up to date on all the latest Delhi news with The New Indian Express App. Download now
TAGS
AAP Old Age Centre