Find out how this artist keeps 1,400-year-old folk art form of Gond alive

From imitating ancestors to conceiving new formations, Gond artists have kept both old and new articulations on an equal foundation.

From imitating ancestors to conceiving new formations, Gond artists have kept both old and new articulations on an equal foundation. Unlike its counterparts like Manjusha paintings from Bihar, Toda embroidery from Nilgiri hills, Roghan paintings of Kutch and others, Gond has survived competition posed by contemporary art especially digital.

A big part of this success story are artists like Dhawat Singh who recognise the importance of evolution.

Despite being a master of traditionality, he has introduced unique aspects into Gond to keep it alive. We see this through his ongoing exhibition called Folklore at Gallery Ragini.

Gond a 1,400-year-old practise this 36-year-old is sincerely trying to promote for the sake of his country’s honour. “It may seem like a tiny thing in the larger scheme of things but Gond heritage consists of stories from our community that cannot be retold or re-lived. Only exhibitions like these allow you a glance into just how varied the spectrum is,” says Singh. 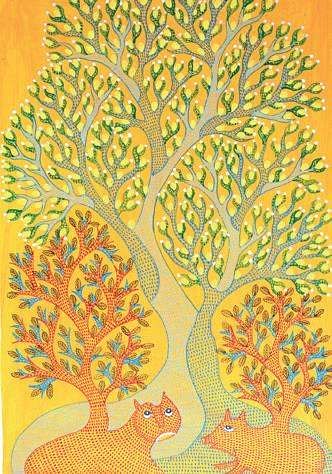 His paintings are made with acrylic colours on canvas and paper. Every illustration echoes the ecological sublimity of his village, Pattangarh in Madhya Pradesh.

The peacocks, the branches of ancient trees, the little migratory birds, the flowers, the mighty skies, the tiny huts, the nocturnal creatures and the many everyday impressions he illustrates through his paintings. “The jungles were our home. The animals were our friends. The nights were wrapped in mystery and the daylight gleamed with hope. We would sing and dance in nature’s praise and art was a big part of this expression,” he says.

Off late, he has added non-traditional imageries to his body of works. One of the contemporary themes Singh has made several paintings on is the tiger. Since he has lived in a village where it was routine to spot a one, he approaches the tiger with love rather than fear.

His art depicts its current plight. Chained and caged, poached and sold, Singh’s tigers call for active action to save them.

In another unusual Gond endeavour, he made an elaborate piece based on poems associated with Mahatma Gandhi on the occasion of his 150th birth anniversary this year. With evolving times, Gond art is recalibrating its meaning and artists like Singh are central to this change.
Till: November 30 At: Gallery Ragini, Taj Ambassador Hotel, New Delhi

A slice of history
They are the largest tribal community in India with their ancestry dating back to the pre-Aryan epoch. Their highest concentration is in Madhya Pradesh however you’ll find them in Andhra Pradesh, Maharashtra, Andhra Pradesh, Chhatisgarh, and Odisha too. Common patterns in their art include trees, birds, fishes, elephants, tigers and the sun. They were traditionally made on mud walls with natural colours from leaves, cow dung, charcoal and others.

Stay up to date on all the latest Delhi news with The New Indian Express App. Download now
TAGS
Dhawat Singh Gond