Kala Bhavana in Shantiniketan is a pioneering fine arts institution. Founded by Rabindranath Tagore, this fine arts faculty is celebrating its centenary this year.

Kala Bhavana in Shantiniketan is a pioneering fine arts institution. Founded by Rabindranath Tagore, this fine arts faculty is celebrating its centenary this year. To commemorate the milestone, an exhibition titled Kala Bhavana: The Legacy of Ingenuity is among the several programmes being organised.

Curator Nishant, an assistant professor in History of Arts at Banaras Hindu University, says, “The idea was to showcase the pedagogy of Kala Bhavana, the fine arts faculty of the Visva-Bharati University.

"The institution is synonymous to artists such as Nandalal Bose, Benode Behari Mukerjee and Ramkinkar Baij, but there was a huge gap after them. We have not been seeing such artists coming from Kala Bhavana lately. And this exhibition is an effort to showcase works of new artists, who are working on the same ideas and principles. Santiniketan was started with an idea that education should not be based on schooling only. They wanted to provide an open space for creative ideas.”

A total of 40 works – paintings, sculptures, print and ceramic by 20 artists are on display. Around 13 of them have works falling in four categories – self and memories, migration and population, green allegory, and gender. Most of them are youngsters, having just passed out from the institution.

Nishant, who has been curating art shows since 2009, deals with the theoretical part of art and teaches sculptures, architecture, iconography, and aesthetics.

He says the most interesting part of the show is the Tempera paintings by Enjamul Islam, and artworks in Wash technique by Gargi Ghost.

“Revivalist Abanindranath Tagore and his disciples promoted these traditional methods to oppose oil, a foreign medium.”

Apart from this, there’s Suparna Mondal’s pieces that deal with elements of art such as dots, lines and circles.

Sculptor Arindam Sarkar’s works talk about depression as a challenge and how the mind can be liberated. While Anirudra Mondal, Enjamul Islam, and Suvajit Mondal have artworks on migration, Santanu Banerjee and Pradip Sengupta have worked on green allegory and artists Shweta Naik, Anup Let, Sukanya, and Portia Roy have focused on gender.

“The section on gender has works commenting on the LGBTQ+ community and the plight of women. The works Bol Ke Lab Azad Hain Tere and Extras of the World are made in cut-wood engraving on print and is based on Faiz Ahmed Faiz’s rendition of the same name. We are planning more such events that will bring to fore the educational practices of prominent institutions,” promises Nishant. 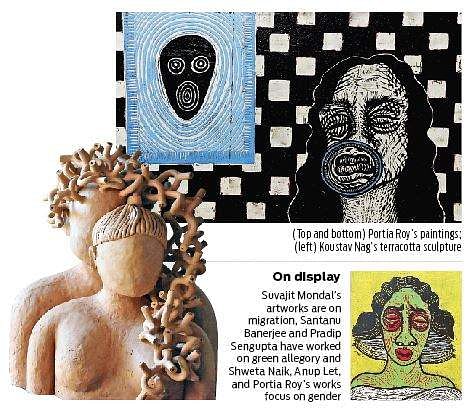 Now we are on Telegram too. Follow us for updates
TAGS
Shantiniketan Kala Bhavana 100 years of Kala Bhavana