Brimming with energy, Bakshi is covering the constituency on foot to a large extent.

NEW DELHI: AAP legislator Praveen Kumar will be looking to retain Jangpura, which was once considered a Congress stronghold as it was with the party for 20 years.

Both the BJP and the Congress have fielded Sikh candidates — Impreet Singh Bakshi and three-time MLA Tarwinder Singh Marwah — in this constituency which has a considerable number of Sikh voters. Though Kumar won by cornering 48.11 per cent of the votes in 2015, the poll this year is a three-cornered fight. 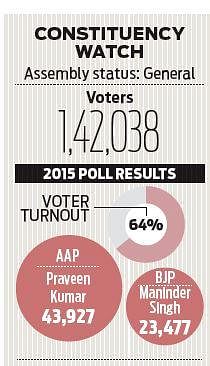 SK Sharma, a businessman, says the AAP’s work was more than satisfactory. “Kejriwal government is doing well, particularly for lower income groups. It has done a good job in education and health.” Sharma says Kumar is quite visible in the area.

Similarly, Anil Kumar Bali from Jangpura Block 4 points that except for revamping of roads in Jangpura market near Pant Nagar, the AAP has done everything else. “He (Kumar) did more than he should. So votes will go to him.”

Ashok Kumar, a shopkeeper, asserts that support for Marwah and Kumar is equally divided. “As Marwah is a heavyweight, one cannot wish him away.”  But, Ashok admits the AAP candidate has a reputation of doing good work which, he feels, can turn the tide yet again.

The impression is completely different among residents when one moves toward Jangpura B, especially those living near Nizamuddin railway station and also areas leading to Sarai Kale Khan.

“We didn’t feel any difference. I live here for 25 years. The Congress earlier didn’t do well. We have the same road and traffic problem. There should be a traffic light. For last 10 years, this road which goes to the railway station is blocked in evening near the three-point crossing. It is accident-prone and there is an open drain where dust accumulates. Politicians only come during election,” says Mukesh Bhatt, a hotelier.

The BJP is eyeing this seat once again which it had wrested briefly in 2013.  This time, the saffron party has given the seat to Bakshi — one of their youngest candidates — with a hope to woo their voters to give it a chance this year.

Brimming with energy, Bakshi is covering the constituency on foot to a large extent. With a strategy to put in hard work and focus, the BJP candidate has been holding meetings till late evenings.

“The urban areas including Lajpat Nagar, Darya Ganj, Sundar Nagar are pro-BJP. People need a change and I am fully prepared. It’s at Nizamuddin Basti and other areas where the AAP has a select following,” says Bakshi.

Stay up to date on all the latest Delhi news with The New Indian Express App. Download now
(Get the news that matters from New Indian Express on WhatsApp. Click this link and hit 'Click to Subscribe'. Follow the instructions after that.)
TAGS
AAP Jangpura Congress BJP