The manifesto promises doorstep delivery of ration, free pilgrimage to 10 lakh senior citizens and Rs 1 crore compensation to kin of a safai karamchari if he dies on duty.

NEW DELHI:  Leaning towards soft nationalism, the Aam Aadmi Party (AAP) released its manifesto for the Assembly elections on Tuesday which includes a ‘Deshbhakti’ curriculum to be introduced in Delhi government schools.

“Every student will be taught patriotism for the country, for the national flag… they will be taught to respect martyrs and soldiers... students will be given lessons to respect the fundamental elements of the nation and humanity. We will infuse patriotism in all,” Deputy Chief Minister Manish Sisodia said, after the launch of the manifesto in the presence of Chief Minister Arvind Kejriwal, and Labour Minister Gopal Rai. Dubbed as “28-point guarantee card”, the manifesto promises doorstep delivery of ration, free pilgrimage to 10 lakh senior citizens and `1 crore compensation to kin of a safai karamchari (sanitation worker) if he dies on duty.

Sisodia said the AAP will not only continue all its pro-people policies such as 200 units of free electricity, 20 kilolitres of free water every month, free bus ride for women but has also drawn a roadmap to make Delhi a “truly world-class city” in the next five years.

Another manifesto promise the ‘Teerth Yatra’ scheme, which was started by the government last year, aims to cover 10 lakh senior citizens. The scheme offers free pilgrimage in 12 popular destinations. However, in December it had to be stopped due to non-availability of trains. Compared to 2015, AAP kept the manifesto to only 28 points apart from the ‘10 guarantees’. The manifesto, however, had no mention of any health scheme.

In its manifesto, the party said its government will introduce spoken English, soft skills and personality development classes for students who have completed their schooling from any Delhi school in the last five years, to raise their employment opportunities and income potential. 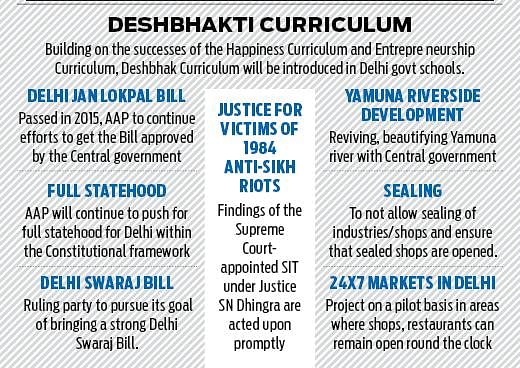 Stay up to date on all the latest Delhi news with The New Indian Express App. Download now
(Get the news that matters from New Indian Express on WhatsApp. Click this link and hit 'Click to Subscribe'. Follow the instructions after that.)
TAGS
Delhi Assembly Polls 2020 Delhi elections AAP manifesto Aam Aadmi Party Manish Sisodia Arvind Kejriwal