AAP’s star campaigners held their breath till the end; won finally in Delhi

Another reason for Sisodia’s early tension was also his Patparganj constituency which had a strong BJP vote bank.

NEW DELHI: Even when it was a cakewalk for the Aam Aadmi Party in the election, its two-star campaigners and candidates had to hold their breath to finally flash the victory sign. Manish Sisodia from Patparganj and Atishi Marlena from Kalkaji constituency trailed in the first half on Tuesday. 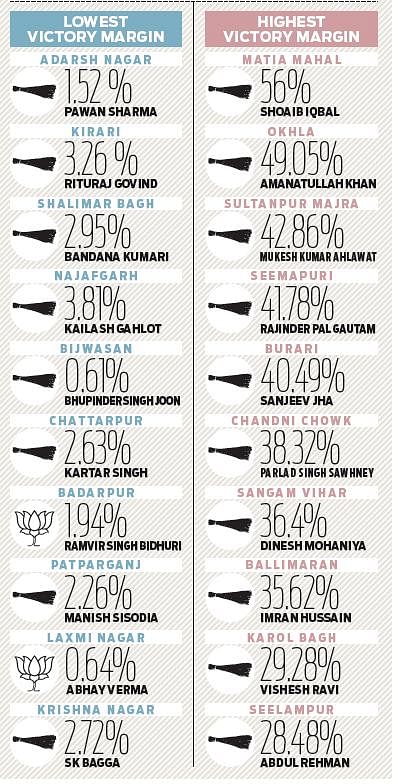 However, they won by the end of the day. The trend showing that both Sisodia and Atishi whose work in the field of education was a major poll plank for the party in the entire election campaign trailing was surprising.

Sisodia won by a close margin of 3207 votes against BJP’s Ravinder Singh Negi.

Reason which could have worked against Sisodia was his ‘open support’ to the women protesting at Shaheen Bagh against the contentious Citizenship Amendment Act and the National Register of Citizens.

The deputy chief minister was the only leader to have openly supported the protest. AAP too had internally feared that it might hamper the party’s chances in the election.

Another reason for Sisodia’s early tension was also his Patparganj constituency which had a strong BJP vote bank.

The Pahari voters there are highly influenced by Uttar Pradesh Chief Minister Yogi Adityanath who rallied in East Delhi aggressively.

Similarly, Atishi won the Kalkaji constituency by a margin on 11393 against the BJP’s Dharambir Singh.

At one point, she was leading by just seven votes.

While she had a neck-a-neck fight with the BJP, her vote share was also cut by the Congress as the constituency has been ruled by Congress Delhi Chief Subhash Chopra for three terms.


The connect with the people was also missing as Atishi was a new face.

Stay up to date on all the latest Delhi news with The New Indian Express App. Download now
(Get the news that matters from New Indian Express on WhatsApp. Click this link and hit 'Click to Subscribe'. Follow the instructions after that.)
TAGS
Delhi Assembly Elections Delhi Polls 2020 Delhi polls Delhi elections aap AAP Star Candidates Atishi Marlena Manish Sisodia