Indian art fraternity mourns the demise of a doyen

His black and white nude studies have their own distinct narrative.

Akbar Padamsee created history. His name will always remain eponymous to the modern Indian art history,” says author-curator Ina Puri on passing away of the renowned artist on Monday at Isha Ashram of Sadhguru Jaggi Vasudev in Coimbatore. He was 91.

“I remember the two-part interview I did with Padamsee for Doordarshan where he explained his art. I realised that we don’t have artists of this calibre. Not just a great painter, Padamsee was also a photographer of enormous competence. His black and white nude studies have their own distinct narrative. He was one of those artists who politically took a stand led from the front,” Puri adds. 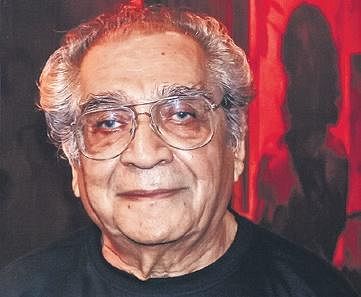 With the death of this art doyen, a glorious chapter of Indian art has come to an end. In fact, he had two shows lined up in Mumbai, his home, on January 9 and 10. While the Jehangir Nicholson Art Foundation, CSMVS, will display the artist’s 22 works, the Priyasri gallery will open the exhibition on 10 to highlight the landmark 1954 court case in which he was acquitted. Padamsee, then 25, was charged with section 292 of the Indian Penal Code (IPC) for his paintings – Lovers 1 and Lovers 2, then on display at Jehangir Art Gallery, his debut show. Both paintings showed a man’s hand on a woman’s breast. “Akbar won the case,” says founder, Priyasri Patodia, adding, “In this exhibition, Judgement in the Trial of Akbar Padamsee, we are retelling this story through archival material documented by Akbar’s sister-in-law, Shahbibi Padamsee.”

According to Yashodhara Dalmia, Delhi-based art historian and independent curator, Padamsee’s sensuous lyrical nudes were matched by his aesthetic paintings of tribes, which showcased deep sadness. “Metascapes too created a new idiom in landscape painting. Here, he reversed the order of nature. The blue water would be above and the sky below giving a jolt and making us look at reality afresh. His exploration with the grey led to unforgettable works like Juhu Beach.”

The Raza Foundation, Hauz Khas, has organised a memorial meet for the artist tomorrow. Ashok Vajpeyi, poet, literary critic and founder, illustrates the similarities between SH Raza and Padamsee. “Both were great friends and spent considerable amount of time in France, with Padamsee coming back to India before Raza. They showed their works together in Paris. Both also shared deep interest in Indian philosophy and aesthetics.”

According to Vajpeyi, Padamsee also took to film photography along with painting and writing, and was concerned about other artists. He also helped to set up Bharat Bhavan.His contemporary Krishen Khanna, 94, was also with Padamsee during many stages in his life. “We were together in Paris, New York, Delhi and Bombay. We grew up together and exchanged ideas and so on. I think he was a wonderful painter who expanded into other fields as well. Acclaimed filmmaker Mani Kaul also made the film Duvidha (1973) in him. He had a great sense of space and understanding of colours.”

Mumbai-based artist Atul Dodiya, who considered Padamsee his mentor, shares Khanna's opinions. “It is commendable to notice the way he used to divide and structure his space in the paintings. The way he used to apply the colours gave his artworks a certain glow and energy from within.”
Dodiya used to regularly visit Padamsee, who was always generous in sharing about life and its philosophy along with the arts. “Sometimes, he quoted French philosophers and shared sayings from their Indian counterparts like Ramakrishna Paramahansa.”

Dodiya says the modernist also taught him to be wary of things like greed. “One gets so many temptations when one tastes fame, but he told me that one should not enter this area. He had said, 'The great experiences you get while creating a work of art is a reward in itself.”

Now we are on Telegram too. Follow us for updates
TAGS
Akbar Padamsee Jehangir Nicholson Art Foundation