'It has been 7 years and we didn't get justice. The government can't see our pain. Both parties are playing politics on the girl's death.' said Nirbhaya's mother Asha Devi.

NEW DELHI: Nirbhaya's mother Asha Devi on Friday accused BJP and AAP of playing politics and alleged that the hanging of convicts of 2012 gang-rape case which was scheduled to take place on January 22, is being deliberately postponed.

"It has been 7 years and we didn't get justice. The government can't see our pain. Both parties are playing politics on the girl's death. I think the hanging is deliberately been postponed," Asha Devi told ANI when asked about the war of words between BJP and AAP in the case.

"Till now, I never talked about politics, but now I want to say that those people who held protests on streets in 2012, today the same people are only playing with my daughter's death for political gains," she said.

#WATCH Asha Devi, mother of 2012 Delhi gang-rape victim: Till now, I never talked about politics, but now I want to say that those people who held protests on streets in 2012, today the same people are only playing with my daughter's death for political gains. pic.twitter.com/FvaC89TwKI

On Thursday, BJP alleged that the AAP government is responsible for the delay in the hanging of Nirbhaya convicts. Later, Deputy Chief Minister and senior AAP leader Manish Sisodia hit back at BJP and said 'Give us Delhi Police and law-and-order responsibility for two days and we will hang Nirbhaya convicts'.

Commenting on Sisodia's remark, Asha said, "It would be good if Sisodia had said 'give me Delhi Police, I will protect girls'."

The mother also urged Prime Minister Narendra Modi to ensure that the hanging of convicts take place on January 22.

Standing Counsel for Tihar Jail authorities Advocate Rahul Mehra has said that the execution of convicts in the 2012 gang-rape case will not take place on January 22.

"It can only take place 14 days after the mercy plea is rejected as we are bound by the rule which says that a notice of 14 days must be provided to the convicts after the rejection of mercy plea," he added.

Earlier, Mukesh Singh, one of the four convicts in the gang-rape and murder of a paramedic student in 2012, had informed the Delhi High Court that his mercy petition is pending before the Lieutenant Governor of Delhi and the President of India and he should be given a minimum 14 days notice between the rejection of his mercy petition and scheduled date of execution.

The Delhi High Court has refused to set aside the trial court order which issued a death warrant. The court had asked the convict's counsel to approach the trial court and apprise about the pending mercy plea.

The Supreme Court had already dismissed curative petitions of the two death row convicts, including Mukesh Singh in the case. 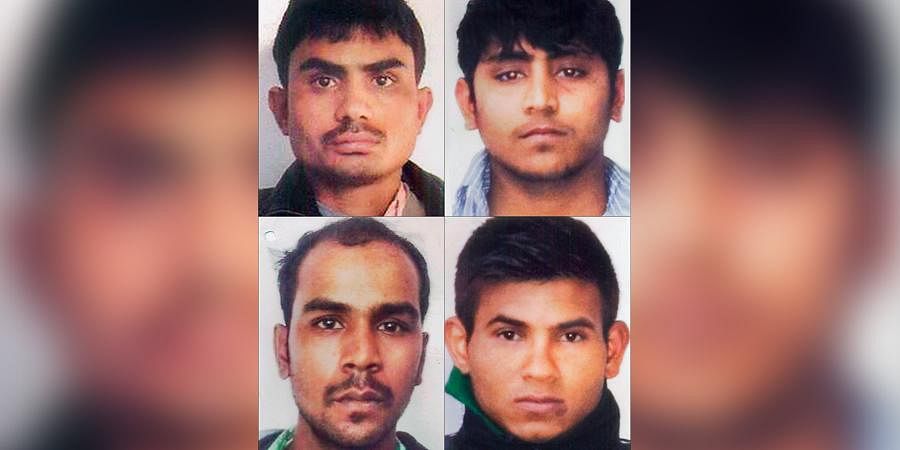 Vinay Sharma and Mukesh Singh had moved the curative petitions in the top court after a Delhi court issued death warrants in their names for their hanging on January 22.

Besides them, two other convicts named Pawan and Akshay are also slated to be executed on the same day at 7 am in Delhi's Tihar Jail premises.

Stay up to date on all the latest Delhi news with The New Indian Express App. Download now
(Get the news that matters from New Indian Express on WhatsApp. Click this link and hit 'Click to Subscribe'. Follow the instructions after that.)
TAGS
Nirbhaya case Supreme Court BJP aap Nirbhaya mother Nirbhaya convicts