With slums one side and a sprawling urban settlement on the other, Shakur Basti is home to a diverse demographic construct, thereby throwing up an interesting study in contrast.

NEW DELHI:  With slums one side and a sprawling urban settlement on the other, Shakur Basti is home to a diverse demographic construct, thereby throwing up an interesting study in contrast. Part of the Chandni Chowk Lok Sabha constituency, Shakur Basti is the home turf of AAP heavyweight Satyendar Jain, who juggles multiple portfolios, including Health and PWD, in the Arvind Kejriwal cabinet. Before AAP surfaced on Delhi’s political landscape, Shakur Basti was represented by both Congress and BJP members in the Assembly.

Vote for AAP or change?
However, Jain broke the duopoly of the Congress and BJP in 2013, as the fresh ideas of his party, coupled with its lower-middle-class approach, clicked with voters. He won a fresh term in the 2015 Assembly polls, riding on promises, which locals said no other party had made before. 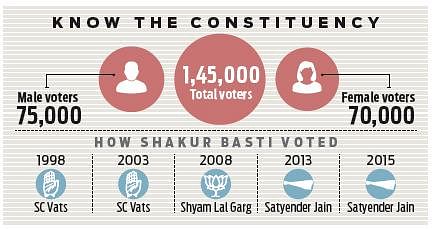 “Woh log (AAP) pehle the jo humare zarurat ko sunn ne aur samajhne ki koshish ki... (AAP was the first party which cared to listen to our needs). Their approach found favour with voters, as a large section of people here live in slums. They wanted to bring change and their ideas were encouraging,” said Sheilu, a local who works as a domestic maid and lives in a slum.

While Jain is eyeing a hat-trick this time, his rivals — BJP’s SC Vats and Congress’s Dev Raj Arora — are leaving no stone unturned to make it a pulsating contest. While Vats, who previously contested the Assembly polls on BJP and Congress tickets and was elected an MLA from Shakur Basti, Arora is a rookie in electoral politics. Before Jain, Shakur Basti had twice elected MLAs from Congress and the BJP. Whether it voted for AAP or change this time would be known on February 11.

Urban vs slum
At 4 in the afternoon, this correspondent saw women, men and even teenagers queuing up with buckets in hand across slums right opposite the Shakur Basti railway station. “We get timely water supply, as tankers are regular here. Lekin ghar mein nal se paani pite toh maza aata (However, it’d be great if we could get tap water at home),” Ranjit Ram, a labourer, said.

Home to JJ (jhuggi-jhopri) clusters and sandwiched between Punjabi Bagh and Pitampura, which are home to a largely urban populace, Shakur Basti has been on the receiving end of political neglect. While Jain has earned global acclaim for reforms in the health sector, especially mohalla clinics, his constituency, according to locals, did not get as much attention from him.

Residents said since the last demolition drive in the slums, netas, across political parties, seldom visited them. While hailing the government’s targeted schemes for the poor — free electricity upto 200 units, free bus rides for women, mohalla clinics, schools and improved water supply — locals said they are sore over the lack of infrastructure development in the slums.“We pooled money and started work on laying sewer lines, as the government didn’t do anything on this front. Who doesn’t want to under concrete roofs? We’ll be happy if the government implements a housing policy for us,” Runa Devi, a local, said.

However, those living in the relatively affluent areas of Pitampura and Paschim Vihar showered praise on the AAP MLA. “All the schemes that the government introduced were implemented in a short span of time. Long pending work on foot over bridges and installation of CCTVs were completed,” Sudhir Bajaj, a resident of Paschim Vihar, said.LK Gupta, a businessman who lives in Pitampura, said, “He (Jain) made it a point to visit us from time to time. Even for affluent and middle-class families, subsidised electricity bills matter a lot.”

Now we are on Telegram too. Follow us for updates
TAGS
Shakur Basti voters Delhi polls