While malls, restaurants and religious places will open in the city in accordance with the Centre's guidelines, hotels and banquets will remain closed.

NEW DELHI: Delhiites will have beds reserved for them at all the city government-run hospitals as well as in some private healthcare institutions during the Covid pandemic, Chief Minister Arvind Kejriwal announced on Sunday.

The Central government-run hospitals may continue to accept Covid patients from other states, he added. “The selected private hospitals performing specialised surgeries such as oncology, organs transplantation, or neurosurgery will be permitted for patients from outside.” 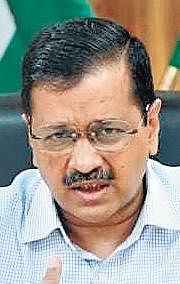 He also announced to remove restriction on inter-state movement, which is stalled for a week, from Monday. “Last week, we decided that the borders would remain sealed for a week. Apprehension was that COVID-19 patients from across the country might come to Delhi for treatment. Such a situation might cause a shortage of beds. At any point of time, about 60-70% patients admitted in city hospitals are from outside and we never deny treatment to any person. But right now, the cases of COVID-19 are increasing and the government is working relentlessly to arrange more beds for the people of the city.”

Justifying the decision to restrict treatment for Delhi residents, Kejriwal said a majority of people and a panel of experts had suggested for the same. “If we get more cases in such a situation, where will we accommodate the patients of Delhi? This is why I asked for suggestions from the people. Nearly 7.5 lakh people have sent their suggestions and more than 90% of people said that till the COVID situation exists, the Delhi hospitals should be reserved for city residents. We need to balance the situation.”

The AAP government’s decision invoked sharp reactions from the opposition BJP and the Congress. Newly appointed Delhi BJP chief BJP Adesh Kumar Gupta led a protest against the policy at Rajghat on Sunday. Gupta was detained along with several BJP workers. “The decision shows insensitivity of the government. Even people of Delhi are not getting timely treatment. The Kejriwal government has mastered the art of misleading people from the real issues,” said Gupta.  Congress spokesperson Ajay Maken said COVID-19 was declared pandemic on March 13 but it took Delhi government over two months to constitute a panel on health infrastructure on June 2.

Both pvt and govt hospitals
Delhi has about 1,163 private hospitals and nursing homes, where beds will be reserved. There are 21 central govt, 51 MCD, and two NDMC run hospitals. Reservation is not mandatory in four self-financed hospitals in the national capital.

Now we are on Telegram too. Follow us for updates
TAGS
Arvind Kejriwal Delhi coronavirus COVID-19