Social distancing in times of COVID-19 a luxury for most

On April 18, 31 members of an extended family, including children had tested positive for Covid-19 in Jahangirpuri area.

NEW DELHI: A coronavirus case reported from a building in Kapashera in southwest Delhi on April 18 left the administration rattled. About 200 people were living on the premises in close proximity and were even sharing the same toilets. Next day, the structure was sealed off in haste and declared a containment zone fearing the source might spread the infection to others. When the results arrived two weeks later, the administration’s fears soon turned into reality. 58 others tested positive from the area.

Kapashera building is not just an isolated incident. Most localities in the containment zones or coronavirus hotspots in the national capital are congested, agglutinative clusters of houses with high population density.Out of 93 red zones, at least in 60 cheek-by-jowl localities such as Sangam Vihar, Khirki Village, Chirag Dilli, Shaheen Bagh, Malviya Nagar, Sadar Bazaar, Madanpur Khadra, Kalyanpuri, Khichdipur, Mandawali, including worst-hit densely populated areas – Chandni Mahal, Jahangirpuri, Nabi Karim, Sadar Bazaar, Nawab Ganj, Tughlaqabad, and parts of Shahdara, maintaining social distance being suggested by the authorities to prevent the spread of the virus is near impossible.

“In slums and other cramped sites, people appear to be more vulnerable to the virus, where they use facilities such as common toilets,” said Dr Mohammad Rehan Raza, sub-divisional magistrate (SDM) Sultanpuri.

On April 18, 31 members of an extended family, including children had tested positive for Covid-19 in Jahangirpuri area. A thickly populated area in southeast Delhi — Tughlaqabad Extension emerged as the third-biggest coronavirus hotspot in the city with 35 cases.

“High-density population areas and congested localities lack physical and social distancing measures therefore chances of the virus spreading there are high. Also, there is no adequate ventilation. When one person is infected, contagion spreads faster. Coronavirus is anyway a fast transmission disease,” said Dr Naval Vikram, Professor (Medicine) at All India Institute of Medical Sciences (AIIMS). 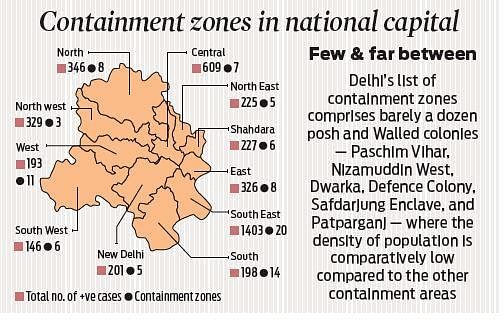 Now we are on Telegram too. Follow us for updates
TAGS
social distancing Coronavirus COVID-19