Back on streets after months, public transport gets lukewarm response in Delhi

The Morning Standard found that social distancing arrangements were followed in DTC buses, autos and cabs and people were seen wearing masks as well.

NEW DELHI: Deepak Kumar, a private employee, who was unable to meet his ailing mother admitted at Safdurjung hospital due to the lockdown, felt relieved as the operation of Delhi Transport Corporation (DTC) buses resumed in the national capital.

The 22-year-old finally got to meet his mother after a gap of almost two months.

The Morning Standard found that social distancing arrangements were followed in DTC buses, autos and cabs and people were seen wearing masks as well. Vehicles were also sanitised after each trip.

However, not many were seen availing these facilities, presumably due to fear of contracting the coronavirus. Major bus stands like Safdurjung Hospital, AIIMS, Central Secretariat, ITO and Sarai Kale Khan saw passengers waiting for buses, while others wore a more deserted look. 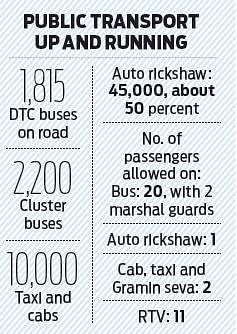 Many people waiting for buses complained about their frequency. “I’ve been waiting here for about an hour and a bus to Badarpur is hard to come by. The frequency of buses should be increased,” said Prabha, waiting outside Safdurjung hospital.

“Half the buses have been deployed for Covid duty and transportation of migrants… The issue of frequency shall be resolved soon. A total of 1,815 buses were on the road today and order to ply AC buses came in the afternoon. Things will get better in a day or two,” said a senior DTC official said.

A 50-year-old VP Sharma, a PWD employee was seen running, requesting a bus driver to stop at the designated bus top. The driver though, did not pay heed to Sharma’s plea.

“It is painful to see bus drivers not stopping for passengers even during such times… The government should take strict action against such individuals,” said Sharma.Auto rickshaws, cycle rickshaws and cab services also resumed on Tuesday.

However, auto-rickshaw drivers struggled on an opening day.

“I have not earned a penny today. I have registered for a pass to go back home. It is hard to survive here,” said Mohammad.

Now we are on Telegram too. Follow us for updates
TAGS
Coronavirus COVID 19