Kejriwal said that he wanted to appeal to the SC the Central government, and states — Punjab, Haryana and Uttar Pradesh (UP) and all other agencies to act on resolving the problem.

NEW DELHI: Buoyed by the success of biodecomposer technique, which converts stubble into manure, Delhi Chief Minister Arvind Kerjiwal on Friday said that the Delhi government would approach the Air Quality Commission (AQC) seeking directions for other states to adopt the method for prevention of crop residue. The CM said that the bio-decomposer technique developed by the Pusa Agricultural Institute has been a success and the study shows around 70-95% of stubble turns into manure.

“I have with me the report prepared by the scientists of the Pusa Research Institute, assessing the impact of the bio-decomposer technique in 24 villages across Delhi, on a sample basis. According to the scientists, around 70-95% of the stubble decomposed into manure. We talked to the farmers, they are very happy with the results. We have the resolve to stubble burning. It is on the governments of other states to act now,” said Kejriwal.

The Central government constituted AQC to monitor the pollution levels in Delhi and national capital region (NCR). The CM further added that the Delhi government would formally file a petition before the AQC with the impact assessment report and appeal to direct the other states to implement the bio-decomposer technique.

Pinning the blame on pollution behind the surge in Covid cases in the national capital, Kejriwal said that he wanted to appeal to the SC the Central government, and states — Punjab, Haryana and Uttar Pradesh (UP) and all other agencies to act on resolving the problem.

“There (bio-decomposer technique) is a very easy and costef fective solution available and so now no government can say there is no alternative to the problem. The report says that it just costs Rs 30 per acre, which can be given out of a state’s own budget,” Kejriwal said.

He said that he believed this would be the last year and the farmers and people wouldn’t suffer due to stubble burning in future.

“For the last 10-12 years, smoke from stubble burning in October and November reaches Delhi and travels across Northern India, which causes massive pollution in Delhi, UP, Punjab and Haryana. I would not go into the reasons but people across North India suffer due to massive pollution from stubble burning every year. Until now, no significant step was taken in this regard, except politics, statements, and conflicts on the matter,” said Kejriwal. 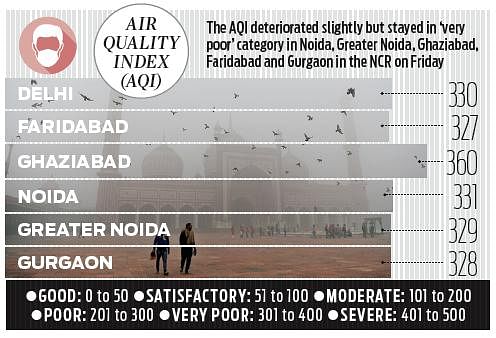 Now we are on Telegram too. Follow us for updates
TAGS
Delhi AQI Delhi Pollution AAP