Despite its glorious history, the 370-year-old Fatehpuri Mosque is dying a slow death in the absence of govt agencies’ attention.

Besides several revered places such as dargahs (shrines), khanqahs (ribats) or madrasas (Islamic teaching centres) in different cities, Mughal emperors in India built two kinds of mosques, in terms of their usage.

The Friday congregation mosque, known as Jami or Jama Masjid, used to be the centrepiece of the city, while the others were established in markets or along with serais (inns) meant for daily service for people living in the vicinity and travellers.

Delhi’s congregation mosque was Jama Masjid, originally known as Masjid-I-Jahan Numa. Its foundation was laid soon after the completion of the palace-fort complex — Lal Quila — in 1650.
The second category mosques commissioned by the royal family members, nobles, or a person of elite rank were attached to musafir khanas (accommodation for travellers) or madrasas at times.

The daughters and wives of the royalty, rich merchants, mansabdars (government officials or military generals) and specific ethnic groups also built small neighbourhood mosques in the city. According to a chapter— ‘Cityscape of an Imperial City’ — by historian and author Stephen P Blake in ‘The Delhi Omnibus’ — a compilation of essays on the history of Delhi, 200 mosques were built between 1639 and 1857, when the Mughal empire ended, in the city outside the fort. 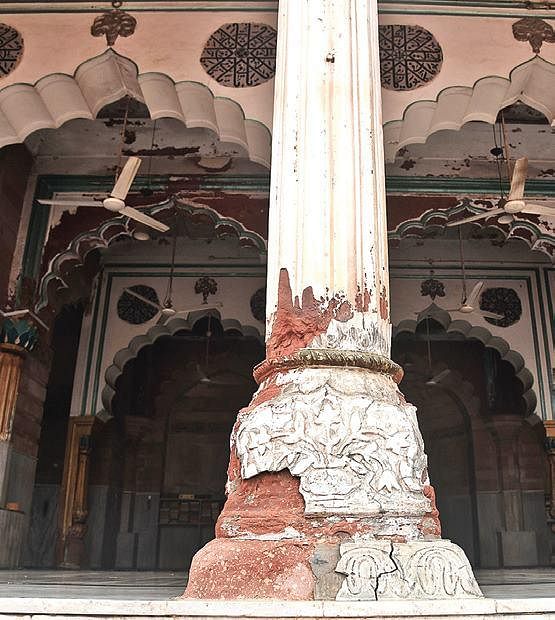 Eight of them, either built by the wives of Mughal emperor Shahjahan or an emir (noble), stood out from all the rest. One in the list was the Fatehpuri Masjid — constructed by Fatehpuri Begum, a special consort of Shahjahan, in 1650 at the western edge of the historic Chandni Chowk.

This imposing architectural marvel made of red sandstone was the second largest mosque in the city and considered a rival to the Jama Masjid. The worshippers and Ulemas (Islamic scholars), having allegiance to Fatehpuri Mosque, actively participated in the fight against the British rule.

But despite its glorious history and significance, the 370-year-old mosque is deprived of care and maintenance for more than a decade. Rampant water seepage has desecrated its double dome.

Dampness has further eroded the roof of the three-arched main prayer hall and stone slabs on the walls. The base of ornate columns in the front of the foyer is also wearing away.

Its three gateways are in a deplorable condition and their decorative burjis (small towers) have fallen long ago.

The worst affected is the northern gate, which opens into the Khari Baoli spice market.
Shahi Imam of the Fatehpuri Masjid Mufti Mukarram Ahmed said the gaps between the stones have widened over the years, thus making the structure vulnerable.

“The minarets on the prayer hall have started tilting. The wuzukhana (covered area for ablution) is crumbling and can cave in any time. The corridors around the courtyard need immediate repair work. Proper waterproofing of terraces is also to be done. The authorities must take cognizance to protect the building like they are doing for the beautification and pedestrianisation of Chandni Chowk,” says Mukarram. The Shahi Imam’s family has been continuing in imamate for generations. Mukarram took over the mantle from his father in 1971.

Following the intervention of former Union minister Kapil Sibal, the Archeological Survey of India (ASI) took up the restoration of Fatehpuri Masjid in 2010, though it was not in its list of protected structures. However, the agency abandoned the project midway within four years.

The Delhi Waqf Board (DWB) is the custodian of the mosque, hence the responsibility of its upkeep and protection also lies with the agency.

Mukarram said repair and conservation of the mosque had been carried out in a piecemeal manner over the years mainly with financial assistance from private individuals but a comprehensive plan by the government is the need of the hour.

“I am not blaming any agencies or the governments but want their attention. I have been writing to the authorities time and again. Recently, I wrote to Union Minority Affairs Minister Mukhtar Abbas Naqvi. Encroachment surrounding the building has made things worse. This place is of great historical significance, hence its conservation must be taken up on a priority basis. Otherwise, after the redevelopment of Chandni Chowk, when more tourists will visit the site, the state of the mosque will cause embarrassment,” says the Imam.

The officials of the DWB, requesting anonymity, said the board couldn’t initiate restoration of the Fatehpuri Mosque or for that matter, any of heritage structures under its custodianship, as it neither possesses funds nor expertise.

The board is the custodian of about 2,000 properties, including mosques, graveyards, schools, shops, and parcels of land, across the national capital. However, in November 2019, then chairman of the panel Amanatullah Khan assured that the restoration work would begin within a month.

He even inspected the mosque and added that the board would bear the entire cost of the restoration and beautification of the religious building. Khan’s tenure ended in February.

Tanvir Ahmed, chief executive officer (CEO) of the DWB, says as the board is yet to get a new chairman, all financial transactions are on hold.

“The Waqf board’s chairman post is vacant for about eight months. So, no approval to any project or work having financial implications can be given as the chairman is the signing authority. As soon as the new chairman is elected, we might start the work at the Fatehpuri Masjid,” says Tanvir. While the board is waiting for the financial approval, Delhi’s food and civil supplies minister Imran Hussain has also initiated measures to restore the mosque’s lost magnificence.

Last month, Hussain convened a meeting at his office at the Delhi Secretariat where he had called representatives of the Shahjahanabad Redevelopment Corporation (SRDC), North Delhi Municipal Corporation (North MCD), arts and culture department and Indian National Trust for Art and Cultural Heritage (INTACH).

The government officials say that the minister was keen on conservation of the mosque and has sought opinions from the stakeholders on whether private contribution could be used for the same.

“The attendees were of the view that adhocism will not work and a proper policy is needed. Soon, there may be another meeting to work out modalities for the job,” says an official.

Mohammad Sadiq, councillor from Ballimaran, says another meeting regarding its beautification is planned with the secretary of department archaeology of the Delhi government Manisha Saxena to take the matter forward.

“We want help and guidance from the department. Therefore, a meeting is scheduled for next week. The minister wants to initiate conservation of other heritage structures and also redevelopment of internal lanes of the area on the lanes of Chandni Chowk project,” says Sadiq, who also attended the meeting.

Rampant water seepage has desecrated its double dome. Dampness has further eroded the roof of the three-arched main prayer hall and stone slabs on the walls.

Other historic mosques in Shahjahanabad

Sirhindi Masjid
(Est. in 1650) in Lahori Gate by Sirhind Begum, wife of Shahjahan

Aurangabadi Masjid
(Est. in 1703) in Lahori Gate by Aurangabadi Begum, wife of Aurangzeb

The mosque, built of red sandstone, is flanked by two tapering towers. The main prayer hall is three-arched-three-bay-deep and is surmounted by a dome. There is a hauz for wuzu (ablution tank) in the middle of the courtyard.

The canal, passing through Chandni Chowk, would flow into the tank. The original tank was destroyed around 1857 and reconstructed later

69 rooms around the courtyard. Some of them are being used for madrasa students

Story of its closure and liberation

In the aftermath of the 1857 revolt, the city residents were driven out. Some British officers proposed demolishing the city, especially the mosques in Shahjahanabad, which had become rallying points for Muslims, as an act of revenge.

The administration decided against executing the suggestions. The principal mosques, including Jama Masjid, were used to station the troops and converted into barracks.

Fatehpuri Masjid was sold to Lala Chunna Mal, a wealthy textile merchant, in 1860 for Rs 39,650. It was returned to Muslims in 1877 and placed under the managing committee run by Punjabi-Muslims traders of the walled city.

Chunna Mal got four villages in return from the government. The mosque now functions mainly as an education centre for underprivileged local children

Now we are on Telegram too. Follow us for updates
TAGS
Fatehpuri Mosque