Earlier this month, CM Arvind Kejriwal had said Delhi was past the peak of the second wave which saw the daily cases rise to 4,473 on September 16.

NEW DELHI: Delhi’s Covid-19 case tally, which is seeing a constant surge for past one week, touched 4,853 on Tuesday recording the highest single-day spike ever. This has raised fears of a third wave in the city.

Earlier this month, CM Arvind Kejriwal had said Delhi was past the peak of the second wave which saw the daily cases rise to 4,473 on September 16.

With Tuesday’s figure, the total cases stand at 3.64 lakh. Experts attributed the rise in cases to pollution and general laxity during festival season. But, they played down the fears of another wave, saying ‘local phenomenon’ could not be called ‘wave’.

“Delhi is seeing variation in cases owing to the behaviour of the population. A similar spike is seen in some other cities as well. People who have been inside their home for so long are now stepping out. So, cases are rising and there are also chances of people getting re-infected. Also, the festive season is going to see more cases, maybe not as much as predicted by the Dr VK Paul expert committee. But certainly post- Diwali, we’ll see cases going up,” said Dr Jugal Kishore, Head, Community Medicine, Safdarjung Hospital. Another epidemiologist said pollution was a key factor for the surge this time.

“Those who are facing respiratory problems are going to doctors and getting test done. In the process, more Covid-19 cases are getting detected. Positivity rate is also increasing.”

​Delhi has seen a see-saw Covid battle, with the graph declining after the first peak in June and then going up in August-end, to dip again in mid-September. For past four days, Delhi’s daily tally has been above the 4,000-mark. 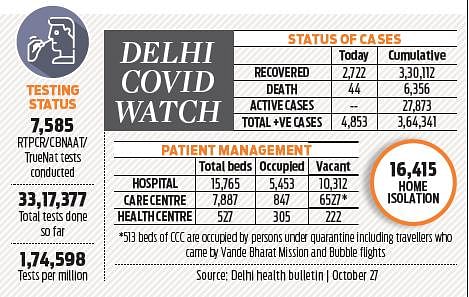 Now we are on Telegram too. Follow us for updates
TAGS
COVID 19 Coronavirus Third Wave of COVID 19 ICMR Delhi covid 19 cases