Even after months of their recovery, symptoms and complications persist in the majority of patients, infected with the Covid-19 in the national capital.

NEW DELHI: Krishna Nagar resident Umesh Sharma, 49, and his wife, Champa Sharma, 48, had tested positive for the Covid-19 on August 1, and two days later, they were admitted to the Delhi government-run Rajiv Gandhi Super Speciality Hospital (RGSSH) — one of the designated Covid-19 facilities.

On August 15, after testing negative, they were discharged from the hospital. However, it wasn’t the end of Champa’s ordeal.

“While I didn’t have any health complications, my wife had been facing throat pain. Another round of X-ray and blood tests were conducted but the reports came normal,” says Umesh.

Similarly, Neeraj Kumar, 40, a resident of Shahdara, has been complaining of cough for the last 22 days — since he has tested negative of the virus.

“I recently consulted a local physician and he told me that there was nothing to worry about. I have been advised to take warm water and some medicines,” Kumar says.

Another patient, 40-year-old Abid Choudhary, who living in Dilshad Garden, have already suffered chronic pain in stomach and back twice in one month. Choudhary, too, had tested positive for the coronavirus and recently recovered from the deadly disease.

Even after months of their recovery, symptoms and complications persist in the majority of patients, infected with the Covid-19 in the national capital.

While some have complained of organ dysfunction, mainly the lungs and brain, many said they have body ache and breathlessness.

One of the latest examples was Union Home Minister Amit Shah who was admitted to the All India Institute of Medical Sciences (AIIMS) in the city after he complained of fatigue and body ache, just four days after he had tested negative for the Covid-19.

Shah, 55, was admitted to Gurugram’s Medanta hospital last month after he caught the virus.

Champa, Kumar and Choudhary have joined the faceless list of 3.1 million who recovered from the infection in India in the last six months.

They are now consulting doctors at Delhi’s first post-Covid-19 clinic at Rajiv Gandhi Super Speciality Hospital (opened on August 20) — which offers OPD services to those who have recovered from the disease but are still complaining of other side-effects. The care centre also has a counselling session for those facing mental health issues.

“It was quite painful. I had chronic attacks twice in one month and, therefore, decided to visit here. The doctors examined me with a lot of care. They said it will take some time to overcome the complications,” says Choudhary, who was admitted to the same hospital when tested positive.

What is post-Covid care and why it’s required?

Many of the patients recovered from the Covid-19 have been complaining of several issues such as crippling anxiety, chest pain, recurring headaches, persistent loss of smell and taste, breathing difficulties, sore throat and mild cough.

Although according to the doctors, the patients who returned to the OPD with post-Covid issues are still very less in numbers, they are not overruling the fact that in future, there could be more such patients.

“At RGSSH, we have been constantly following up with patients to get their health updates. When a few patients raised complexities of breathing, heart issues, loss of smell or taste even after their recovery, we decided to open the centre,” says Dr Ajeet Jain, nodal health officer for Covid-19 admissions and post-Covid care at RGSSH.

“We had already anticipated that more patients are likely to visit us. We had also realised the need for a mental health counselling session, of late, many patients had approached us with such issues.

"Firstly, people fear for their life when it comes to coronavirus and then, the patients who had to stay away from their families were uncertain about their survival. All these factors contributed to developing anxiety syndromes.”

Dr Jain says there are two types of patients who are facing the post-recovery issues — those with comorbidity and those with no prior heart or lung issues.

“The life of those patients who had comorbidity is compromised. Others are facing the loss of smell or taste even months after recovery. Some have complained of having severe gastro pain. As of now, we have only OPD services for such patients. But by next year, the government may have to come up with a dedicated post-recovery hospital... There have been instances when patients, admitted in our hospital, had tested negative but were unable to go home. We had to shift them to another hospital so that they recover from other complications,” Dr Jain says. 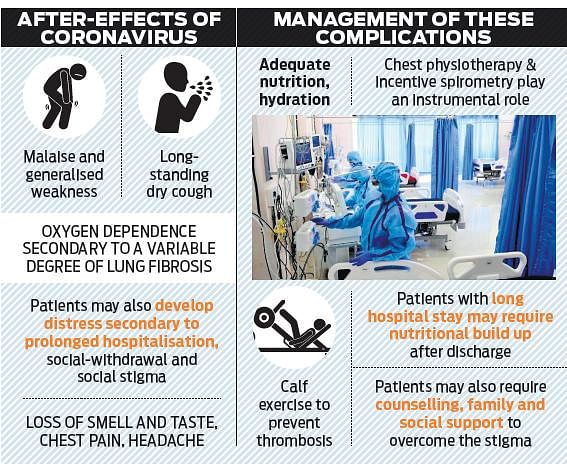 Why recovered patients are showing symptoms?

Dr S P Byotra from Sir Ganga Ram Hospital explains: “The virus is just six months old. A lot is yet to be understood. Earlier, we assumed that once a patient is recovered from the Covid-19, the person is stable. But unfortunately, it’s a complex disease. So far, we have observed that those who had pre-existing lung or heart complications are struggling with post-recovery problems.” Also, the patients who had to be given oxygen therapy when tested positive for the disease have developed fibrosis, he says.  “But how much damage has been done, only time will tell... Lung, nervous system and heart are a bit risky. But we surely, need to do more follow up with our patients,” Dr Byotra says.

Dr Anant Mohan, a pulmonologist at AIIMS-Delhi, also admits that it is too early to clearly say what are factors driving behind re-emergence of Covid-19 symptoms.

Dr Manoj Sharma, a senior consultant of medicine and in-charge at Medeor Hospital Qutab Institutional Area, says lung damage can sustain even for more than a month post-recovery.

Not just because of fibrosis, but also owing to post-viral myositis, which makes the overall functioning of heart weak.

“At times, during the treatment, patients are given immune supplements or steroids. As a result, some are more prone to catch the secondary infection as immunity remains low,” Dr Sharma says.

How serious is re-occurrence of symptoms?

“Those patients with pre-existing heart and lung diseases are always at a higher risk of mortality even after their recovery from the Covid. Because of their weak conditions, they are more likely to get further infected. So, the fatality risk remains. Few damages are likely to remain in the long run,” explains Dr Sharma.

First re-infection of Covid-19 in Bengaluru

In possibly the first case of Covid-19 reinfection in Bengaluru, a 27-year-old woman who recovered from the infection has contracted the virus again, within a month, Fortis Hospital in Bannerghatta Road said on Sunday.

Doctors at the hospital confirmed the patient to be the “first case of Covid-19 reinfection” in Bengaluru.

“RT-PCR is a very sensitive test. So, if some virus fragments remain in the body, they can test positive in RT-PCR, but that doesn’t mean the person has been re-infected. Some reminiscent of the virus may remain in the body,” Dr Sharma says.

Apart from the Covid Care in RGSSH, Chief Minister Arvind Kejriwal had said the Delhi government will provide oximeters to those recovered patients who are facing post-Covid complications.

Also, a group under the Union Health Ministry is working on guidelines on long-term complications among recovered from Covid-19 patients. The team includes experts from AIIMS-Delhi, ICMR and WHO’s India office.

Italy: 85% had at least one symptom

In July, an Italian study in the Journal of the American Medical Association involving 143 recovered patients two months after the onset of the first symptom, found over 85 per cent had at least one symptom.

The Chinese media reported that a study involving 100 recovered patients in Wuhan, where the pandemic began last year, had discovered continued lung damage in 90 per cent of the subjects.

Addressing a press briefing last month, Niti Aayog member and head of the national task force on the coronavirus, V K Paul had recently said: “Post-Covid sub-acute morbidities are a new dimension. Scientific and medical communities are keeping an eye on it. These things are happening to an extent.
We will have to be aware that there may be some impact later too.”

Recent studies suggest that those recovering from Covid-19 may have antibodies for only a few months, a signal that long-term immunity is difficult to achieve, but several scientists dispel the gloom and say it is too soon to determine if such individuals can contract the disease again.

Some special cells of the immune system may still offer protection against the disease, the scientists said as questions swirl on whether people who have recovered can get it again.