Pakistan issues visas to over 1,000 Sikh pilgrims for Baisakhi celebrations

Pakistan on Wednesday said it has issued visas to around 1,100 Sikh Indian pilgrims to facilitate their participation in the Baisakhi celebrstions between April 12 and 22.

NEW DELHI:  Pakistan on Wednesday said it has issued visas to around 1,100 Sikh Indian pilgrims to facilitate their participation in the Baisakhi celebrstions between April 12 and 22. According to a statement issued by the Pakistan High Commission, the visas were issued as a special gesture in view if the importance of Baisakhi for Punjabis and Sikhs. Baisakhi marks the start of their new year. 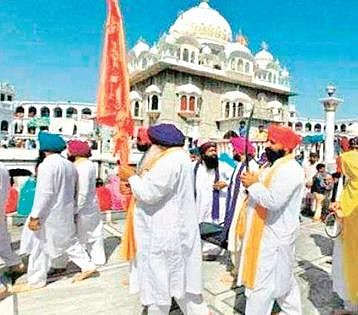 The move comes amid a relaxation in tensions between the countries following a joint statement by the Director Generals of Military Opoerations, reiterating their commitment to adhere to the 2003 ceasefire along the Line of Control (LoC). Leaders of both nations have hinted of late that they are willing to address the issues through dialogues, instead of indluging in hostilities.

Late last month, Indian Army Chief General MM Naravane had said that the LoC has been silent for the first time in around five to six years, as not a single shot was fired on it in March, bar ring an odd incident. “The Pakistan High Commission extends special felicitations to all those celebrating this auspicious occasion and wishes the visiting pilgrims a fulfilling yatra,” said the statement.

Now we are on Telegram too. Follow us for updates
TAGS
Pakistan Baisakhi celebrstions Sikh Indian pilgrims pilgrimage visas