DDA gets ball rolling for redevelopment of 6 more slum clusters

The projects will be taken up in public-private partnership (PPP) mode for which the authority on Friday invited bids from the private developers.

NEW DELHI:  The Delhi Development Authority (DDA) has set the ball rolling for the in-situ redevelopment of six slum clusters in Rohini, Haiderpur, Pitampura, Shalimar Bagh, Badli, and Pooth Kalan, where nearly 7,000 economically welfare section (EWS) category families will be rehabilitated. The projects will be taken up in public-private partnership (PPP) mode for which the authority on Friday invited bids from the private developers.

The survey to identify genuine claimants to take benefit under the schemes has already been completed. The eligible slum dwellers will be rehabilitated in 60 per cent of the land and the project will be financed by commercial exploitation of the rest 40 per cent of land by the developer. At Shalimar Bagh and Pitampura, the agency has proposed to build 1,099 dwelling units with an estimated cost of rehabilitation component of Rs 152.39 crore. As per the tender document, the cost of the rehabilitation component of the Haiderpur project and Badli Village is Rs 260.30 crore and Rs 108 crore respectively.  For the Pooth Kalan project in Rohini, where 429 flats are planned, the estimated cost is Rs 57.18 crore.

“We are expecting to complete the tendering process by June and after which the projects could begin. All six projects are likely to be completed within three years,” said an official, aware of the development. The DDA started working on 16 in-situ redevelopment projects to rehabilitate about 34,000 families living in slum clusters at various locations last year. About 7,500 under-construction houses for the economically weaker section (EWS) category at Kalkaji Extension, Jailorwala Bagh (Ashok Vihar), and Kathputli Colony (Shadipur) are likely to be ready for allotment by end of this year.

The detailed project reports (DPRs) for 10 more projects comprising 20 Jhuggi Jhopri (JJ) clusters covering about 24,000 households are under preparation.  The authority has already initiated efforts for the redevelopment of slum clusters at Dilshad Garden. The approximate number of slum households to be rehabilitated at the Dilshad Garden project is 3,367. Spreading over 6.2 hectares, the indicative project cost is Rs 468.10 crore.

“Each eligible slum dweller household will be provided with a dwelling unit of size about 28 sqm. During the development phase, the dwellers will be provided rent support of Rs 6,000 per month to enable them to relocate temporarily,” an official of DDA had said earlier. The DDA has been appointed the state level nodal agency (SLNA) for implementing in-situ slum rehabilitation under the Pradhan Mantri Awas Yojana-Urban (PMAY-U) with regard to 490 JJ clusters built on land belonging to DDA and central government. 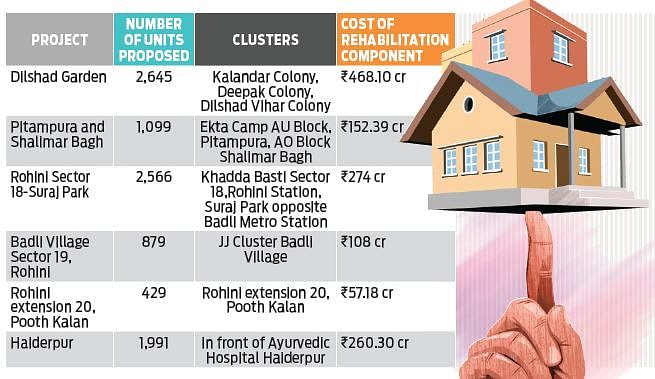 Now we are on Telegram too. Follow us for updates
TAGS
Delhi Development Authority DDA