During her many visits major art centers, she got drawn towards this topic of work.

Professor Dr Jyotika Sehgal, has encapsulated her lifelong work on 19th-century poet Mirza Ghalib into her solo show at Delhi’s Shridharani Gallery. Titled Synonyms of Life, she has displayed eight paintings weaving her practice-based research on the acclaimed poet with curatorial advisor and art critic Uma Nair. The topic of her research being, ‘An enquiry into lingual to visual’ translation process as a form of trans-disciplinary and trans-cultural mediation’, Delhi-based Sehgal has used four ghazal for her distinct renderings. 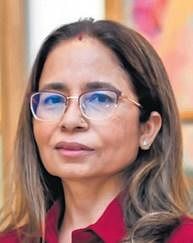 “From his rich poetry, I selected four ghazals as my poetic texts, which largely related to the four basic facts of life, aforementioned above. Similar to that, the four basic motivational muses behind the initiation of an art expression from a visual artist too are four, either personification of a feeling; or using a metaphor to suggest an expression, or personal inner compulsions; or creative reactions to works already present,” says the artist, who is the Head of Department of Painting, College of Art, Delhi University.

During her many visits major art centers, she got drawn towards this topic of work. “Ghalib was merely shown in symbols in many paintings I came across, but the doyen of Urdu literature has so much to say to us. Hence, I took this topic,” she says in a conversation with The Morning Standard. She further adds, “I have imbibed Ghalib’s works for a long time now. Moreover, my father has been a scholar of Urdu and Persian, so poems and poets have been a constant companion to my life.”

According to her, linguistically, her work is based on George Steiner, a foremost theoretician of translation, “who stated that ‘all procedures of expressive articulation and interpretative reception are translational’. As a painter and a minor poet, I too believe that behind all understandings, there is a kind of translational process involved, that all interpretations are different forms of individual translations, which bridge the varying modes of expressions of any two or more meaning-giving entities.”

Similarly, Sehgal also refers to French theoretician Paul Ricoeur. “He points, that ‘as soon as there is a language, there is an interpretation, that is a translation” and that “the words exist in time and space, and thus have a history of meanings, which alter and evolve’”.

Finally, the artist divulges about using the medium of egg-tempera in her works. “My personal handling of this medium was most suitable to my search into the translation activity, mediating between the peripheries of two language systems, the lingual and the visual. After repeated applications of ultra-thin colour glazes for over 300 times, gradually the final painted surface emerges, conducive to the cognitive process of the translation act.”

Now we are on Telegram too. Follow us for updates
TAGS
Jyotika Sehgal mirza ghalib