NEW DELHI: Delhi saw an alarming 17,282 fresh cases of Covid-19 on Wednesday, registering a surge of nearly 4,000 in a day and more than double the figure of the third peak recorded on November 11, when 8,593 cases were reported. In just 15 days, the national capital has recorded 98,624 cases and the cumulative figure now stands at 7,67,438. 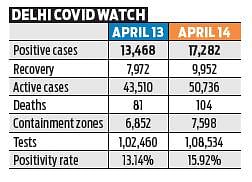 To evaluate the ground situation, Health Minister Satyendar Jain visited LNJP Hospital to meet the patients and their family members, take their feedback, review the facilities available and motivate the staff and doctors. He directed the management to ensure that the admission process was speeded up.

The government had on Tuesday announced measures to augment medical facilities. On Wednesday, it released a list of banquet halls, schools and sports complexes attached with hospitals in order to enhance the bed capacity.

Now we are on Telegram too. Follow us for updates
TAGS
delhi COIBVD 19 Coronavirus Pandemic