The officials said that the response has been satisfactory and as per their expectation, hence, the agency would not extend the deadline.

NEW DELHI: OVER 26,000 potential home buyers have applied for the housing scheme launched by the Delhi Development Authority (DDA) offering 1,354 flats on January 2. Tuesday is the last day for submitting applications.

The officials said that the response has been satisfactory and as per their expectation, hence, the agency would not extend the deadline. According to the details provided by the authority, it has received 26,365 applications and 15,103 applicants have also deposited application money till Monday evening.

“The number of applications and fee submission may increase exponentially on Tuesday as the deadline nears. It has been seen that several people apply in the eleventh hour,” said a DDA official.  Till 6 pm on Monday evening, total 3,245 applicants deposited money for flats under the economically weaker section (EWS) category. For lower income group (LIG), the DDA received security deposits from 1,711 people and 10,147 was either for middle or higher income group. 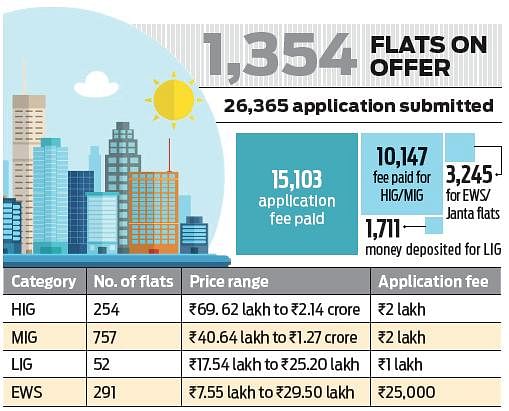 About 46,500 applicants have shown their interest in the flats and made registration on its website within two weeks. For its previous housing scheme in 2019, the authority received about 45,000 applications for 18,000 flats. The successful allottees may avail benefits under credit linked subsidy scheme as it is part of the Pradhanmantri Awas Yojna –housing for all (urban), which means people fulfilling the criteria will get subsidy in the interest when they take a bank loan.

The authority is also arranging site visits for the applicants, who would want to inspect the dwelling units before applying.  Of the 1,354 units, 757 MIG category flats are located in Dwarka, Rohini, Vasant Kunj, Jahangirpuri and Madipur and 252 HIG units on the offer are in Jasola, Vasant Kunj, Dwarka, Nasirpur, and Rohini.  About 140 flats of various categories are old flats which couldn’t be sold in previous schemes.

Now we are on Telegram too. Follow us for updates
TAGS
DDA Delhi Flats