Residents of northeast Delhi have rebuilt their houses which had been reduced ashes. Despite the trauma, most have no grudges against the other community and want to live in peace.

The smell of fresh paint still lingers in Mohammed Salim’s renovated two-storey house in the congested and bustling northeast Delhi neighbourhood of Shiv Vihar. Many of their household items kept in cartons are yet to be unpacked. Salim and his family recently shifted back to their house after taking refuge at a rented apartment in Mustafabad for nearly a year.

Shiv Vihar was one of the worst-hit localities during the communal riots that broke out in northeast Delhi on February 24 last year, when mobs armed with swords, metal rods and axes turned the streets into a war zone for two days, vandalising almost every house, including Salim’s.

Salim, his wife and their three children were among hundreds of residents who had to flee leaving everything behind when a violent mob entered Shiv Vihar area — where the family has been staying for the last two decades — on February 25.

“Apna ghar to apna hota hai. Chahe kuch bhi ho jaye, wapas toh aana hi tha (No matter what it is ultimately the best feeling to be back home. We had to come back). A year on, we have renovated the house, but the scars of violence will always haunt us. We will never forget what we had to go through last year,” Salim, who is an electrician, says.

The communal violence had broken out in northeast Delhi on February 24 last year after clashes between citizenship law supporters and protesters spiralled out of control leaving at least 53 people dead and more than 580 injured.

“It was unfortunate and horrifying. But we have no grudges against anyone. Even the Hindu families in the area had to bear the brunt of the riots...They had also suffered losses. They, too, lost their family members and properties. We all want to live in peace and harmony,” Salim says.

​Pointing at his renovated house, Salim says he had no other options but to rebuild it as it was completely damaged in the riots. But still, Salim says, he didn’t think of shifting to any other locality. “It is all good here. We have a cordial relationship with our Hindu neighbours. We talk and greet each other whenever we meet,” he says.

‘We left as soon as they asked us’

Recalling the terrifying moments, Salim’s wife, Husnara, says on February 25, a mob carrying weapons barged into their house and asked the family to vacate the house immediately.

“Sirf jaan chhod di unhone humari. Jo kapde pehne huye the, usi mein bhaage (They just spared our lives. We left the house as soon as they asked us. Their faces were covered, so we couldn’t identify anyone... They looked angry, agitated. They asked us not to lock the door. We escaped towards Mustafabad,” she says.

When the family returned to the area after four days of riots, the house was completely gutted. Salim had received compensation from the Delhi government. “I had to start everything from scratch to build the house... Then, the Covid-19 lockdown was imposed and that led to further delay in the construction work,” Salim says.

Rajesh Kumar, who shares a common wall with that of Salim’s building, says his house too had suffered damages in the violent clashes. Kumar, who works as a security guard, says his and two more Hindu houses were spared by the attackers.

However, he had to rebuild the drawing-room which had caught fire after the mob set Salim’s house ablaze.

“We have no hatred against Muslims. Many Hindu families here had helped Muslims to take shelter and helped them escape from the area. No one wants violence, be it Hindus or Muslims,” he says. Kumar and six members of his family too had to leave Shiv Vihar and shift to Karawal Nagar on a rented house. They returned to the renovated house two months later.

Like Salim and Kumar, many other residents of Shiv Vihar had been staying in Chand Bagh, Chaman Park and Mustafabad areas on rent. Another resident Mohd Javed says those who had managed to rebuild their house early started returning from October-November. Others came back in January.

“Most of us have received compensation from the government, but considering the financial losses and the trauma we had to go through, the amount was not enough. Most of us had property damage amounting to Rs 5-7 lakh (on average). We lost all our jewellery, cash, important documents and furniture. Most of us are unhappy with the financial assistance given by the Delhi government,” says Javed. In Brijpuri, many of the families whose houses were gutted in the violence are yet to return home.

Jagroshan Lal, who along with his son, Ashok, runs an Ajanta Electronics store, had witnessed the wrath of a mob last year when the shop was vandalised and set on fire. For a short period, the family had shifted to Burari.

“Kisi dange ke wajah se ghar nahi chhodenge (We can’t leave the house any violence). If we can survive a riot, then can surely start afresh,” says Jagroshan.  He, however, says two of his Hindu neighbours are yet to return home.

​“While one of them has started reconstruction of his damaged house recently, the whereabouts of the other family is not known. “I can’t say if they will come back or not. The affected people are left with two options — either sell their house and shift to another locality or reconstruct and settle back. The problem is no one wants to buy a burnt house,” adds Jagroshan.

‘No to Muslim tenants’

‘Jai Shree Ram’ written in bold fonds in Hindi is the first thing that would come to one’s notice at Pramod Kumar’s shop of gas cylinders and equipment in Gokulpuri. Born and brought up in the same locality, 35-year-old Pramod now has a strict no-entry policy for Muslim tenants in his houses. “The riot has changed the equation between Hindus and Muslims, and there is no shame in accepting or acknowledging that. The unity in these areas is a myth.

Not just me, but no Hindu family here wants to keep Muslims tenants in their house. Once the damage is done, it is irreparable. Why do they (Muslims) have to live in Gokalpuri? They can look for a house in the area where the people of their religion live. Khoon toh abhi bhi garam hai sabka (the blood still boils). But yes, we don’t want another bloodshed,” says Pramod.

Brij Kishore, another resident of Gokalpuri who runs a grocery shop, says Muslim tenants are either from Bihar or Uttar Pradesh who work as daily wage labourers. “Currently, around 1,000 Muslim tenants are living in Gokulpuri,” claims Kishore. “We are ready to bear any financial loss but won’t keep any Muslims as tenants, and the reason is very  simple. What if they attack us,” Kishore says. 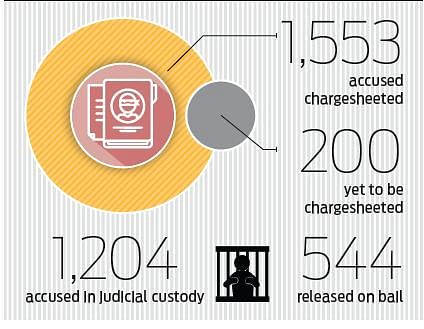 ‘No problem with Hindus’

In Mustafabad, a Muslim-dominated area,  locals, however, say they have no problem with Hindu tenants. Mohammad Irshad says for many in the area, house rents are the only source of income. “People here welcome tenants of all religions. People have to run families... How will we survive if we don’t get tenants? There are Hindus who have been living here for several years without facing any trouble,” he says.

When it all began

Use of latest technology

The communal violence had broken out in northeast Delhi on February 24 last year after clashes between Citizenship Amendment Act (CAA) supporters and opponents spiralled out of control, leaving at least 53 people dead and more than 580 injured.