Senior government officials said that though the public work department had initiated a process to rope in a new consultant; it would take more time to start work on the ground.

NEW DELHI:  The Jama Masjid precinct redevelopment plan has hit a roadblock again as the consultant architect appointed for the project has 'pulled out’.

Senior government officials said that though the public work department (PWD) had initiated a process to rope in a new consultant; it would take more time to start work on the ground. 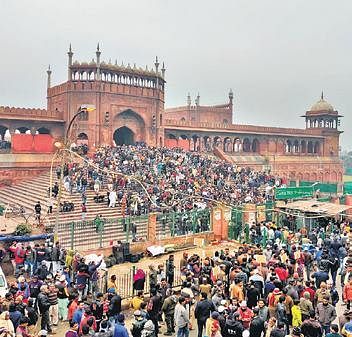 “This time, we were confident of starting the work but Pradeep Sachdeva Design Associates (PSDA)— the consultant architect for Jama Masjid precinct project has withdrawn. Now, the department will have to repeat the entire exercise and get the designs by the new consultant vetted from authorities,” said an official. The Jama Masjid precinct plan supposed to be implemented in two phases—was accorded final approval in 2019 after several rounds of consultations with stakeholders.

Under the first phase, the authorities had proposed to clear urban mess around and beautify the streets around the 360-year-old masjid. In the later stage, shrines, Meena Bazaar, and facilities such as overhead cables and drainage system were to be rehabilitated.  After the exit of the consultant, the PWD has decided to expand the scope of work by adding two more tasks facade restorations of heritage buildings on the Chandni Chowk main road and refurbishment of Netaji Subhash Marg, starting from Dilli Gate crossing to Lothian Bridge, as Heritage Street on the line of ongoing work of in Chandni Chowk.

“The motive to appoint the same architect or designer for three works is to expedite the projects pending for years,” said an official, privy to the development.  The proposal for giving a facelift to the Mughal era mosque’s surroundings spread over 23 acres was first conceived in 2004. However, the first master plan was approved by the Delhi Urban Arts Commission (DUAC) in 2009.

As the project remained on the papers despite multiple attempts, Lieutenant Governor Anil Baijal had to intervene and issue directions to expedite the work in 2018. “Noted architect Pradeep Sachdeva was working on the Jama Masjid project. After his unfortunate death last year, we are looking for a new consultant,” Urban Development Minister Satyendar Jain said.

Gautam Sachdeva of PSDA said the studio would share the research it had done over the years on the project with the architect who gets the project.  “The contract for Jama Masjid precinct redevelopment plan between PSDA and the government had expired long ago. The studio did a lot of research. We will be happy to share it with the agency which is assigned the job,” he said.

Now we are on Telegram too. Follow us for updates
TAGS
Jama Masjid Jama Masjid redevelopment plan