The Special Cell is investigating the conspiracy and criminal designs behind these unfortunate events of January 26.

NEW DELHI: Delhi Police’s Special Cell will investigate the ‘conspiracy’ and ‘criminal designs’ behind the violence during the farmers’ tractor parade on January 26, officials said on Thursday. The Delhi Police claimed that there was a “pre-conceived” and “well coordinated” plan to break the agreement arrived at with farmer leaders to bring international embarrassment for the government on Republic Day.

“The Special Cell is investigating the conspiracy and criminal designs behind these unfortunate events of January 26. A preliminary assessment suggests there was a pre-conceived and well coordinated plan to break the agreement reached between Delhi Police and the leaders of farmers organisations, to indulge in violent confrontation with the security forces, to breach the sanctity of iconic and historical structures and monuments and to create an international embarrassment for the government on the occasion of the Republic Day,” the police said in a statement.

It further said, “Thousands of protesting farmers had clashed with the police during the tractor rally called by farmer unions to highlight their demand for repeal of the Centre’s three farm laws.” Many of the protesters, driving tractors, reached the Red Fort and entered the monument. Some protesters even hoisted religious flags on its domes and the flagstaff at the ramparts, where the national flag is unfurled by the
prime minister on Independence Day, the Delhi Police statement said. 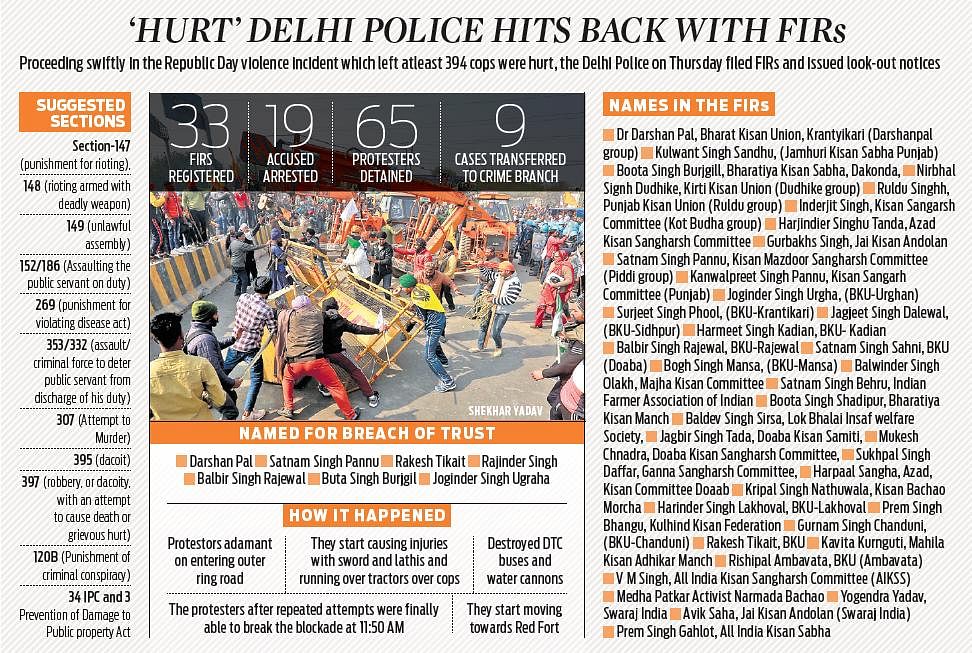