In the ongoing vaccination drive, people aged 60 years and above and those in age group 45-59 years having comorbidities are being administered the vaccines at 192 hospitals across Delhi.

NEW DELHI:  Chief Minister Arvind Kejriwal will receive his first dose of Covid-19 vaccine on Thursday morning at the city’s LNJP hospital, a government statement has said. The chief minister will receive the shot around 9.30 am. Kejriwal, 52, has been receiving treatment for diabetes, officials said. In the ongoing vaccination drive, people aged 60 years and above and those in age group 45-59 years having comorbidities are being administered the vaccines at 192 hospitals in city. 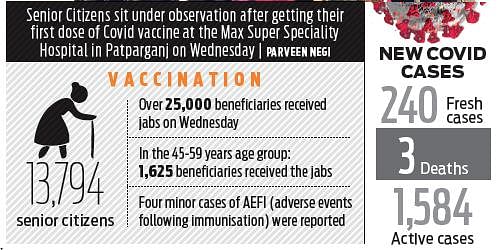 “Today, 25,054 people were vaccinated, out of which 13,794 were citizens in the age group of 60 and above,” the official said. On Tuesday, a total of 21,227 beneficiaries, including 10,213 senior citizens and 1,442 people in the age group of 45-59, received the shots.  In the first phase, starting January 16, over 3.6 lakh beneficiaries comprising healthcare workers and frontline workers, have been vaccinated in Delhi.

Four minor cases of AEFI (adverse events following immunisation) were reported on Wednesday, he said.
Meanwhile, Delhi recorded 240 new Covid-19 cases on Wednesday and the positivity rate rose to 0.35 per cent, according to data shared by the Health Department. Three more fatalities pushed the death toll to 10,914, authorities said.