100 not out: The story of Delhi's centurions who received the Covid vaccine

In Delhi’s inoculation drive, senior citizens have outnumbered health-care workers so far. But the stories of these two, who have went past three figures, stand out because of the age factor.

Tulsi Das Chawla is 104 years old and Khazan Singh is 103. There is something common between the former Indian Foreign Service officer and the farmer, other than the fact that they are above 100. Both are recipients of first doze of Covid-19 vaccines. In Delhi’s inoculation drive, senior citizens have outnumbered health-care workers so far. But the stories of these two, who have went past three figures, stand out because of the age factor.

Sitting by the study table at his East Patel Nagar house, Chawla looks pleased and proud of becoming a centenarian beneficiary of the vaccination process. “If I can handle Partition, I can handle anything,” says Chawla, in loud and clear English. “Getting the jab was a smooth process. There were no complications. The system at the hospital was good. Doctors were cordial. After knowing my age, the staff came forward and took photos with me,” chuckles Chawla, who got the shot a week ago at Sir Ganga Ram Hospital.

Having served in the Indian Foreign Service, Chawla lived abroad for many years and retired in 1975. Son Ashok informs that apart from being low on hearing, his father doesn’t have any problem. “He doesn’t have blood pressure, sugar, heart ailments or Alzheimer’s. He doesn’t need any kind of medicines. He is totally vegetarian and has never been a drinker. He has always followed a systematic and healthy lifestyle. Also, he loves spicy stuff like chaat, samosa and all at this age. He digests everything,” says Ashok.

A look at Chawla’s daily routine explains why he is going strong. The morning alarm is set at 5.30 and by 6.30, he is out for a walk in the park. Ashok says that his father prefers an active life and doesn’t like lying idle. “He still has a keen interest in foreign affairs. He watches TV and I give him articles related to his field to read. Owing to his habit of reading newspapers, father was aware of the pandemic and how Covid-19 changed lives. Initially, it was difficult for him because suddenly his outings came to a halt. He is also a member of Arya Samaj, although he misses the weekly meetings now. His first proper outing after the lockdown was going for vaccination,” says Ashok.

Born on November 1 in Pakistan’s Kot Addu city under Punjab province in 1917, Chawla and his family moved to Delhi during Partition. Having lost his wife 35 years ago, Chawla has four children, five grandchildren and a great grandchild. “He has been always been a disciplined man and a patriot. He was 30 years old when he had to endure the pain of Partition.

That left a deep scar. His memory is very sharp. He can recollect those days and narrate how he landed here, got into service. There are times when he opens up with those stories. He reminds us that we are lucky to be born in ‘Azaad Hindustan’”, states Ashok. Listening to what his son is saying, Chawla adds: “I first landed at Lodhi Road but didn’t go to a refugee camp. I waited for my family to arrive. I applied for a plot and was allotted this place. Since then, this has been my permanent address.”

Khazan Singh leads a similarly ailment-free life. He has no blood pressure, heart or kidney problems and doesn’t need medication. But he did face minor issues before being able to take the vaccine. “He was immediately ready when we told him about getting the jab. We assumed that owing to his age, maybe the Delhi government would get him vaccinated at a government hospital.

But we had to do it on our own, by paying `250 at a private facility in Red Cross Hospital,” says his son Dhan Singh. A resident of Dilshad Garden, Khazan Singh originally hails from Uttar Pradesh’s Baghpat, where he was born in 1918. He shifted to Delhi in 1985. A farmer by profession, he has always been physically active. Age has affected his hearing and his son had to speak in a louder tone when this newspaper caught up with Khazan, clad in white dhoti kurta and sporting a Nehru cap.

“Apart from hookah, he never had any addictions. Not even tea or coffee. He loves desi food, enjoys jaggery and ghee in the morning and has two meals a day. Communicating is an issue, but he has his schedule fixed so he manages his daily work. Even at this age, he takes bath by himself, shaves himself and even washes inner garments,” the son informs. Khazan doesn’t like being confined within the four walls. Having spent much of his life in rural areas, he finds solace in the parks of his locality. The lockdown was hard for him initially.

“His daily routine in the morning after breakfast would be going to parks and returning before lunch. He would visit another park in the evening. He loves spending time outdoors. When the lockdown was announced, he took it personally. For a few days, he was angry and didn’t leave his room, remaining on his bed. When we tried telling him about Covid-19, he said ‘aisi bimari bohot dekhe hai’.. He would refuse to believe that such a virus has spread in India,” laughs Khazan’s daughter-in-law.

Father of two sons and two daughters, grandfather of nine and great grandfather of four, Khazan was an active participant in the freedom movement. He was an ardent follower of Mahatma Gandhi. Dhan Singh says that his father takes pride in narrating an incident when he roughed up policemen at Red Fort. Khazan’s face lights up when recollecting this tale. “The police officer was tall, but we gave it to him,” he smiles.

Group Captain Gur Prakash Singh Bakhshi is not as old as Chawla or Khazan Singh, but he is 99. He has a pace-maker, has gone a bypass surgery, suffers from a chronic kidney disorder. All that did nothing to prevent him from getting the vaccine. A former Air Force officer who was on duty during World War II, he knows what it takes to fight adversities.

“A reason why we decided to get him vaccinated is, he needs to change the battery of his pace-maker. Initially we were a bit apprehensive but after having discussions with physicians, we got a go ahead and got the first jab process at Moolchand Hospital,” says his son PS Bakshi. 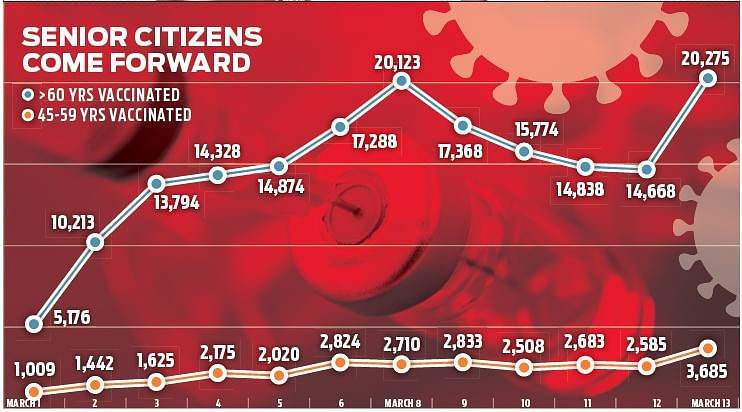 Born in what is now Pakistan, Gur Prakash was educated in Ludhiana. A former Indian Air Force officer, he served the force from 1941 to 1976. “He can hear clearly and talks coherent. He is not someone who prefers outdoors, so the lockdown didn’t have much of an impact on his life. The good part is, we became more spiritually inclined during this time and started attending Satsang thrice a day on Zoom,” adds the son.

The family initially had doubts about the vaccine but those were dispelled following discussions with doctors. “Once that was done, we became keen on getting the jab and it happened smoothly. Special care was taken by authorities, preference was given to my father when he went to get the vaccine,” states his son.

The vaccination drive in Delhi saw an upward trend from March 1 after it was made open for senior citizens and patients with comorbidities. After a slow start, the process gained momentum. However, a trend that can be noticed that the percentage of vaccinations is higher in private facilities than in government set-ups. Experts claimed many want to get Covishield, which is available in private hospitals, and hence the rush. A few facilities have started 24x7 vaccination process.

However, officials from Delhi government-run facilities such as Rajiv Gandhi Super Specialty Hospital said they are achieving more than 95 per cent of the daily target. “Apart from a few days, we see more than 195 beneficiaries turning up. In fact, when the per day target was only 100, we had to send back so many people because we didn’t have the privilege. Private hospitals, in comparison, are aesthetically better. That can be a drawback of government set-ups,” says Dr Ajeet Jain, Covid-19 duty and vaccination in-charge at RGSSH.

Vaccination drive in the national capital has got encouraging response from senior citizens. Two of them draw special attention. They are centenarians. Somrita Ghosh finds out how these super seniors spend their days and what keeps them going

Now we are on Telegram too. Follow us for updates
TAGS
COVID vaccine COVID-19 Delhi coronavirus vaccination