Offering a steady platform for these whimsical imageries is THL, a digital media foundation for cultural heritage enthusiasts.

Who’d imagine a Kalighat painting of a seated dhoti-clad man in suave double hair buns, ear loops, necklaces and smoking a pipe, would become the poster boy for a meme – ‘Me, Waiting for a vaccination slot’.

That a lazy, curled up cat by Jamini Roy when converted into a GIF could grow shark teeth and attempt to swallow up the viewer? And how about an Instagram reel where paintings of 19th-century nautch girls are animated groove to Tones and I’s hit single, Dance Monkey?

Offering a steady platform for these whimsical imageries is The Heritage Lab (THL), a digital media foundation for cultural heritage enthusiasts.

Following the art world’s digital shift in the pandemic, THL has come to increasingly rely on the gifts of pop culture – GIFs, memes, stickers, jigsaw puzzles – and fuse these with images of Open Access Indian artworks (CC0/Creative Commons Zero designation) that exist in public domain for unrestricted use. 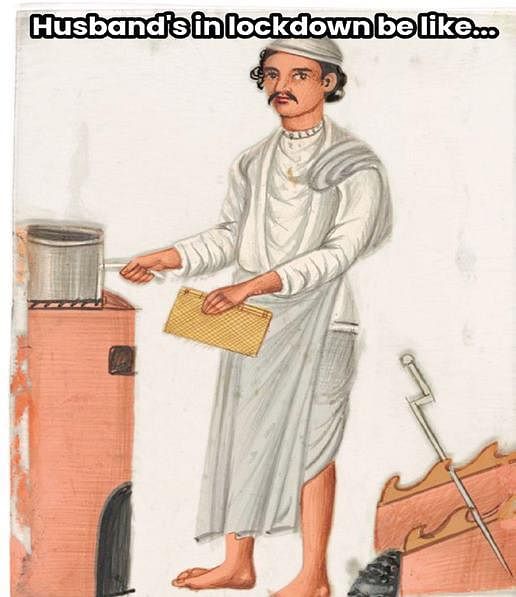 Under its Open Access awareness programmes, THL has two ongoing initiatives – ‘GIF IT UP’ that allows viewers to turn 13 artworks from Delhi Art Gallery (DAG) museums into GIFs, and ‘Indian Art Meme Maker’ with 30+ artworks from Cleveland Museum of Art, Smithsonian, Metropolitan Museum of Art (Met), and more, ready to meme. Its website (theheritagelab.in) even provides the designing tools and images to create your own artwork.

On International Museum Day (May 18), THL, announced a new interactive initiative, ‘Digital Storytelling Festival’, to encourage enthusiasts and academicians “to use copyright-free or openly licensed material” to tell stories.

This is in collaboration with Europeana, a web portal for digitised museum collections of over 3,000 European institutions.  On the jury is Poet and Culture Theorist Ranjit Hoskote, Senior Lecturer in Law at the University of Exeter Dr Andrea Wallace, and Flickr’s first designer George Oates.

Winners will receive 12-course bundles from Domestika. Delhi-bred and now Chandigarh based Founder of THL, Medhavi Gandhi, 34, who is also a self-proclaimed Digital Strategist, Open Access Advocate and museum lover, talks about the importance of open access artworks and how museums can monetise. Excerpts:

Tell us about your aim behind using Open Access Indian artworks.

With our Open Access programmes, we don’t want to undermine the value of scholarship of the artwork because that has its own audience. We just want to bring in new audiences and museum art into daily conversations. However, I must add that many scholars are also enjoying these GIFs and memes.

Last year, DAG was the first Indian museum to open up its 13 artworks, which led to the ‘GIF IT UP’ competition. We received over 100 GIF’ed up entries. This March, we created Instagram stickers like ‘Hello Gorgeous’ for World History Month.

With the ‘Digital Storytelling Festival’, we are inviting submissions in social media and editorial formats. For instance, if you want to tell a story of climate crisis, you use Rangmala paintings to show that man has always had some relationship with nature, and do this as an Insta story/reel or a 2,000-word essay with images.

However, THL doesn’t want to be the sole creators of these GIFs. We want more creators to use this repository to create animations, GIFs, stories, videos, décor pieces… Seeing the response to our projects, we hope museums such as the National Museum that have digitised their collections, let go of the license for artworks that are already in public domain. The possibilities are immense, and we are creating this repository on THL’s platform so it’s easier to locate all open access Indian art that exist in museums across the world.

What is stopping museums in India from taking the Open Access route?

In the West, over the last couple of years, museums like the MeT, V&A, are increasingly opening up collections under the CC0 designation.

There, the trend has already started where more and more philanthropic initiatives and grants are being made available to not just digitise artworks, but also conduct projects that propagate the use of Open Access collections.

We are trying to get museums in India to do the same, but what we can or cannot do with the works is still a big cloudy, grey area. There’s the fear that the museum will stand to lose the chance to sell image rights to publications.

But how many people are buying those books? If you take in account how much you have made through selling image rights vs the value of public participation you can garner with an open access policy… the latter is much more.

As an Open Access Advocate, I am not a fan. When matter are put behind a firewall, we automatically cut off a certain segment of people. The ticket price of some ASI museums is just `3-5 which anyone can afford, so why can’t it be the same online?

Tell us about your Embrace Digital project.

The project is in collaboration with ICOM Germany and Staatliche Museen zu Berlin [SMB] to create a toolkit that connects German and Indian museum professionals to upskill and explore the digital possibilities together.

If an institution in Germany is uploading a painting by 16th-century artist Nainsukh, they should have an idea of the keywords that someone in India will type for that particular image to show up in the search. We wanted India’s museums professionals go to Germany (and likewise) and work on time-bound projects. The pandemic has put this plan on hold, but we continue to collect resources for the toolkit.

How museums can monetise?

Museums can look brands’ CSR activities. For instance, a museum is well-positioned to partner with a brand that wants to tell the story of water conservation by offering written content, participation from schools…. Besides, the brand will reach the audience, while the museum gets the funding for a cause that is important to both of them.

But, as the generation of people working at a brand are those who have never gained anything out of a museum, the museum must be ready to introduce them to the possibilities.

Museums can look at competitions on designing merchandise, and give the winners creator rights or a share as they have created a new audience for you along with new material to sell.

The angle of sponsored projects can be looked only when you have a large number of loyal, returning readers/visitors. For instance, schools are mandated to do museum trips, so make that fruitful for learning, such that you become a recurring base and get grants based on that.

Firstly, not all the collections at these institutions have been digitised. There’s no one database about what objects are in storage and on view. If objects go missing and there are no records of them, we will have lost valuable cultural heritage material.

Museums have shifted in the past but used proper transparent process. It will be helpful, especially for researchers and academicians to locate what is on view and in storage, what is/not digitised/not.

Divert these funds to the conservation efforts of these collections. India has a lot of freelance conservators, so it’s not a human resource problem, but not every museum has the bandwidth to setup a conservation studio.